We get lots of birds around our place in Australia. Even though we’re only a few km from the centre of the city we see birds every day. A big, noisy flock of cockatoos descended onto a pine tree at breakfast one morning, making it look like a well-decorated Christmas tree. I used it for our Christmas card this year.

Our courtyard – I’m looking into it from my desk as I write this – features some flowers which wattle birds really like. During the flowering season (right now) there are regular wattle bird visitors, dipping their long beaks down into the flowers.

This season we also had a blackbird nesting in the courtyard. Blackbirds are not native Australian birds and the females are not even black, they’re more dark brown. The blackbird protested loudly every time a wattle bird dropped in although I don’t think the wattle birds posed any threat to the blackbird and its nest. Wattle birds can be very protective of their flowers and a couple of years ago we had one which attacked me any time I got too close to its personal patch. 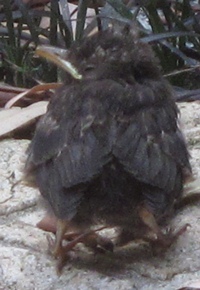 ave the next and hopped around the courtyard at ground level. Mom dropped in to feed the fat little butterball all morning, but come afternoon she’d departed. The chick complained loudly for hours and then it was gone as well, it looked far too fat to fly, but that’s nature. 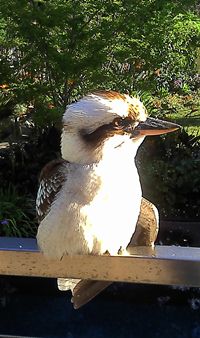 ◄ And a magnificent kookaburra in my backyard

Meanwhile, out in the back yard, it’s been all out war between a visiting kookaburra and two little wagtails which must be nesting in one of the trees. Kookaburras are magnificent birds – and a real symbol of Australia – but they’re also cold-blooded killers who’ll take baby birds out of their nest or fish out of ponds. For a couple of days the wagtails attacked it fearlessly, but the kookaburra simply ignored them. At times it was like King Kong being attacked by little fighter planes, when it took to wing it became a big bomber, pursued by its little attackers.

The wattle birds have been breeding too, yesterday there were two of them busily stuffing pollen down their offspring’s throat.