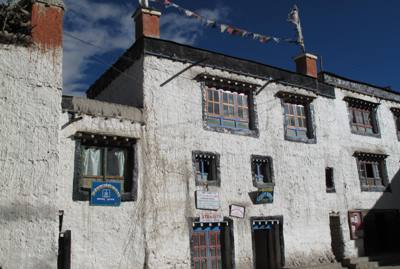 ▲ The first half of our two week trek to the legendary Tibetan kingdom of Mustang or Lo Manthang took us up to the ‘capital’ Lo Manthang. This is the main square of the walled town. The king’s palace, where we had an audience with the king,’ overlooks the square from the other side. 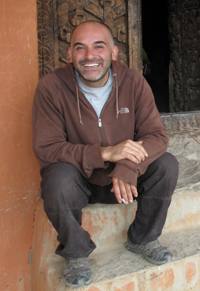 ◄  Italian art restorer Luigi Fieni has been working on the murals in the town’s gompas for 13 years. He spends six months in Lo Manthang every year. 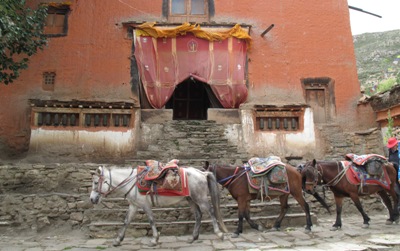 ▲ On the way south we stopped at the Ghar Gompa, a legend relates that Guru Rimpoche overcame a demon at this spot. The demon had been interfering with the construction of the Sakya Gompa in Tibet so the guru had to get rid of it. 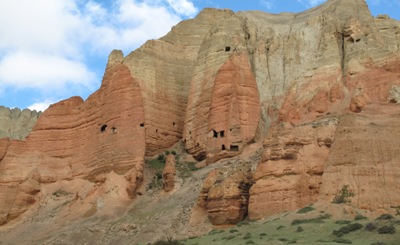 ▲ And why are the cliffs red around the town of Drakmar, our stop that night? Why that’s the ‘blood of the demon’ of course. 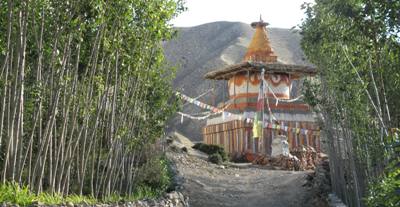 ▲ Chortens are found all along the trail to Mustang, this one marked the northern entrance to the village of Chhungsar where we camped for the night. 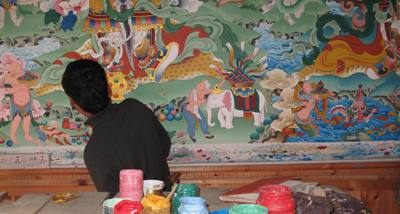 ▲ The following night we arrived at Samar where a small team of thanka painters from Kathmandu were racing to finish painting the walls of a new gompa before the winter snows arrived.

▲ Every morning our camping gear was loaded on to the back of the mules to be moved on along the trail. 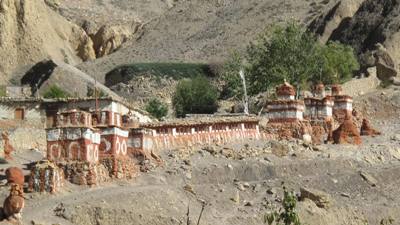 ▲ From Chhuksang, our next night’s stop, some of our group made a sidetrip to the strange little village of Tetang. Its gloomy little gompa featured three very moth-eaten stuffed snow leopards and, pinned to the walls, old magazine photographs of British Prime Minister John Major and US President George Bush senior with the Dali Lama. This fine mani wall stood just above the village. 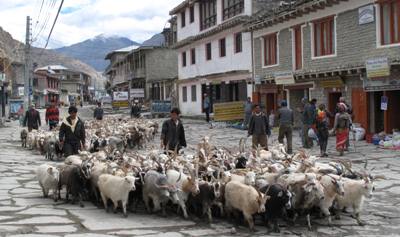 ▲ Finally we arrived back in Jomsom although we abandoned the flight back to Pokhara the next day due to bad weather. It took nine hours by road to cover the 50km south to Beni and the main road to Pokhara. After an overnight stop it took another four hours to Pokhara, a long bus trip in comparison to the 20 minute flight!