With my daughter Tashi, son Kieran and their partners plus four other friends I made the trek (and horseback ride) up to the legendary capital Lo Manthang in the second half of September. Change is on its way, a road is already open from the Chinese border south to Lo Manthang and a road is under construction north from Pokhara. This was a last chance to see the ‘old’ Mustang.

Me in the background, Kieran, Tashi, Sarah and Kristian in front. ▼ 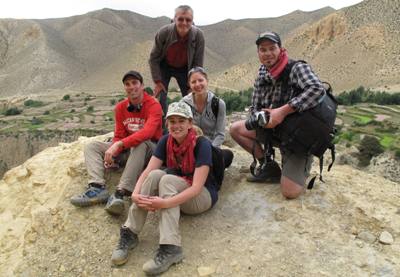 Mustang or Lo Manthang has been dubbed ‘little Tibet’ and ‘the last forbidden kingdom’. It’s a small slice of Tibet with Tibetan people, following Tibetan culture and speaking the Tibetan language, north of the Himalayan watershed on the Tibetan plateau, but physically within Nepal. Until 1992 outside visitors were not allowed at all, then for some years only in very limited numbers. Today it’s open (when weather conditions permit) to anybody willing to fork out for the US$500 10 day special permit. Which means just a couple of thousand people each year. 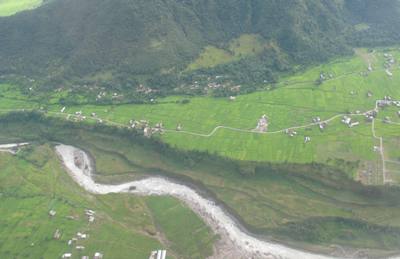 ▲ Flying from Pokhara to Jomsom is over green and lush countryside until you cross the Himalayan watershed.

▲ Coming in to Jomsom is a different story, it’s dry and desert like to the north.

▲ Construction of the new road means Indian Hindu pilgrims can fly to Jomsom and then take a jeep on their ‘darshan’ (pilgrimage) to the sacred flame at Muktinath. Previously it would have been three or four days walk from Pokhara via Jomsom.

▲ Building the new road is not proving easy, this excavator had tumbled from the road down to the Kali Gandaki River, killing the operator. 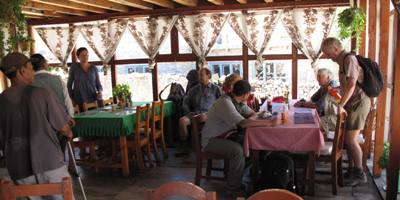 ▲ Teahouses are opening along the route, just as on other Nepal trekking routes. This one is at Ekle Bhatti – a small village which translates as ‘One Teahouse.’ The name is already inaccurate, there are three.

▲ An impressive pedestrian suspension bridge heads off from the main trail to the village of Ghyakar. 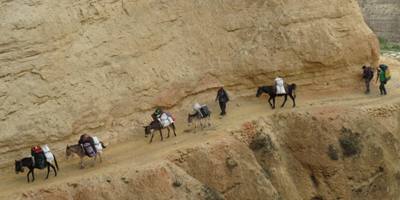 ▲ Pack horses and mules along a narrow path in the canyon side. 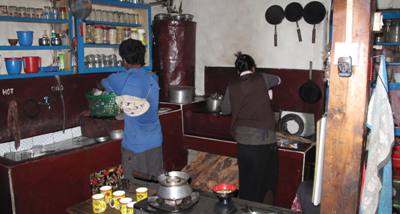 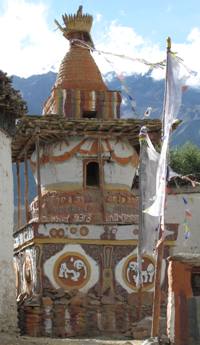 ◄ A beautifully painted chorten in the village of Geling where we had a rest day. 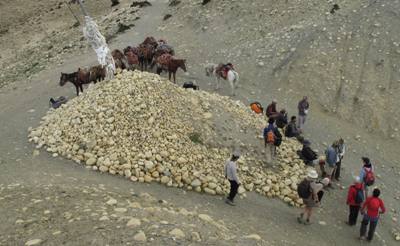 ▲ The tops of passes were often marked by stone cairns, passers by should add another to the pile.

▲ A long mani wall above the village of Ghemi. Mani walls are made up of mani stones, each one carved with the mantra ‘om mani padme hum’ in Tibetan script. ‘Hail to the jewel in the lotus,’ is one translation. Click here for the 2nd part of the Mustang trek.