In 2009 I caught four great rock concerts – Leonard Cohen and then Neil Young in Melbourne, Van Morrison at the Albert Hall in London, Al Stewart in Newcastle in northern England. Rock-wise nothing hit the same high in 2010, not even U2 on their 360º tour when it came to the Etihad Stadium in Melbourne. Too ‘big’, too ‘impersonal’, no ‘connection.’ You might as well have watched it on a TV.

▲ U2 from my perspective 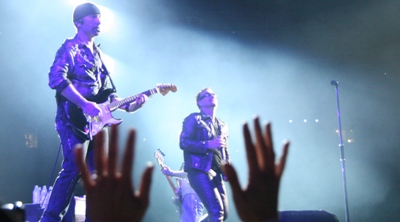 ▲ Perhaps it would have been more like a rock concert if I’d been down the front – like my daughter Tashi and her boyfriend Kristian, this is one of Kristian Daely’s photographs from their perspective.

In fact the best rock concert of 2010 was Rickie Lee Jones, also in Melbourne, but at a much more personal venue, the old Forum Theatre. I’d been to one previous RLJ concert – 1990 in Tokyo.

▲ Tosca (and the conductor) in the Arena at Verona

There were a half dozen operas during the year including Il Trovatore and Aida in the ancient Roman arena in Verona, Italy. Now that’s a place where even the most uneducated opera-goer, me for example, will be blown away. Of course Maureen, the educated opera-goer in our relationship, went to more operas than me including a Ring Cycle in Los Angeles. I was in Hong Kong and Macau a the time. She said it wasn’t very good. Other operatic performances even included the Australian soprano Nicole Car (accompanied by Tom Griffiths) performing at our house for an Opera Australia fund raiser.

Of course there was plenty of other music from music talks at the Wheeler Centre, to pub rock (including the Lonely Planet house band Slabotomy) and even a chance encounter with a busking theremin player in the centre of Melbourne.