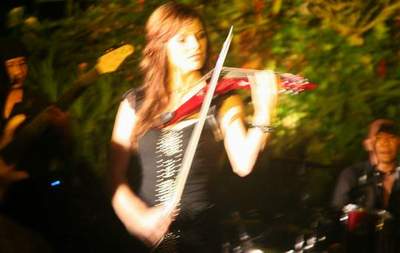 I’m running through my travel lists of 2008, yesterday I started with 10 Hotels, today it’s Music. Music in 2008 included seven operas, a play about music and a music cruise along the Great Barrier Reef. But the musical highlights were voodoo-jazz in Haiti and a Balinese-Javanese-Australian rock (and other influences) band in Bali.

I am not an opera buff – that’s my wife Maureen’s role in our relationship. Despite that I went to seven operas during 2008. Six of them – Arabella, Carmen and Masked Ball at the Sydney Opera House, La Fille du Regiment and Il Trovatore at the open air Opera Holland Park venue in London and Otello at the Melbourne Arts Centre. Plus I went to The Marriage of Figaro without Maureen at the Athaneaum in Melbourne.

The ship Orion anchored off Hayman Island in the Whitsundays

We also went on a five night opera cruise along the Great Barrier Reef on the ship Orion and in between there were many other musical interludes and any number of movie musical moments, I even saw the Martin Scorsese Rolling Stones movie Shine a Light twice. There was also one very music focussed play – Tom Stoppard’s Rock & Roll with its Pink Floyd (in Cambridge) and Plastic People of the Universe (in Prague) storyline – but my two musical highlights of 2008 were in Port-au-Prince, Haiti and Ubud, Bali. 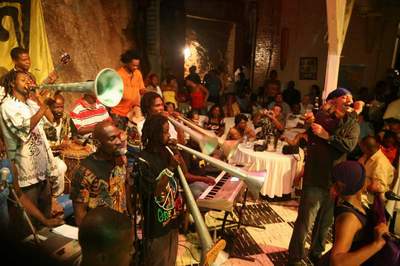 One was catching the voodoo-jazz band RAM playing at the Oloffson Hotel in Port-au-Prince. RAM kicks off around midnight every Thursday night and my visit to Haiti encompassed two Thursday nights and I caught RAM both times. What can I say, they were terrific. Although the first Thursday night I was staying up at Pétionville (no room at the Oloffson) and despite warnings about not wandering the streets of Port-au-Prince after dark I had to find a moto-taxi (ie the back seat of a motorcycle) back to my hotel in the early hours.

.
The second musical highlight was at the closing night party at the Ubud Writers Festival and my diary entry says it all about the band … Saharadja, Balinese-Javanese and ranging from Celtic sounding stuff to jazz and rock and throwing in everything including a vigorously played didgeridoo. The key elements are band leader Rio Sidik, on guitar and very energetic trumpet for the jazz numbers, and his Australian partner Sally Jo on electric violin. First the violin looks terrific, a candy apple red instrument from a science fiction movie, and second she looks terrific too. Hot, very short dress, high heels, the audience love her (I do too), she’s the one being photographed …