OK, it’s time to look back over the last year. Starting with Museums & Galleries. Reading through my diary for the past 12 months there sure were a lot of them! Some highlights:

▲  The Alexandria Library right on the Mediterranean Coast in Egypt. An interesting attempt to bring the greatest library of the ancient world back to life.

The Museum of Garden History in what was St Mary-at-Lambeth Church by the Thames in London. I was only there because you have to go through the museum (and then it feels like through the kitchen) to get to William Bligh’s tomb. I’ve had a long and ongoing interest in the controversial captain and his ship HMS Bounty, over the years I’ve dropped in on a long list of Bligh and Bounty locations. I’ve been to Tahiti (where he went to collect those damned breadfruits), to Bruny Island in Tasmania (where he stopped off with HMS Bounty en route to Tahiti), to Bligh Water in the Fiji Islands (where the mutiny took place), to Kupang on Timor in Indonesia (where Bligh ended up after his epic open-boat voyage), to Tubai Island (where the Bounty mutineers made a first attempt at finding a hideaway from British naval justice) and Pitcairn Island (where they finally ended up).  So going to pay my respects at his tomb was definitely on the list. 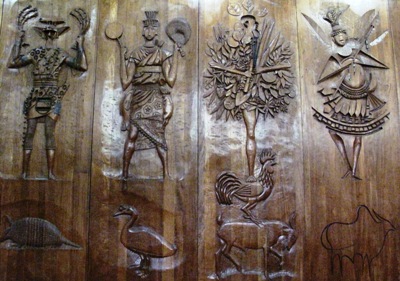 ▲  In Salvador in Brazil the Museu Afro-Brasileiro with a wonderful series of wooden bas reliefs by the well respected local artist Carybé, inspired by the orixás, the assorted deities of Candomble.

A host of museums and galleries in Bruges in Belgium. The Museum of Hong Kong History with interesting exhibits on the Opium Wars story and the Japanese occupation during WW II.

In Melbourne, Australia all sorts of exhibits including several at the wonderful Ian Potter Gallery (Rupert Bunny, an interesting Australian expat in Paris from the 1880s through to 1933), the  National Gallery of Victoria (Ron Mueck’s hyper-realistic and wildly out of scale human figures), the Melbourne Museum (the Titanic Exhibit and the opportunity to have a behind the scenes tour of some of the Aboriginal collection). I summarized some of the many exhibits we caught in London in On in London.

And there were a couple of interesting aviation museums, the Darwin Aviation Museum in Australia and the Shuttleworth collection in England. Both with connections to flying England-Australia in the years between the wars. We made an interesting multi-stop flight from England to Australia in October.