Muscat is a spectacularly sprawling town. To the west the Hajar Mountains drop down to the Batinah Plains before they reach the sea. From Muscat and further east the mountains tumble straight into the sea. As a result Muscat is a series of enclaves dotted amongst the barren, rugged peaks and connected with swooping and sweeping freeways. 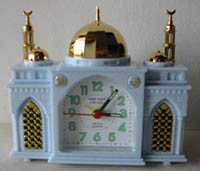 Leaving our car in Muttrah, the port area of the town, we stroll along the waterfront to the old walled city, stopping for a wander around the souq where Tad buys the quintessential Arabian Peninsula souvenir: a mosque alarm clock which wakes you up with the call to prayer. I’ve had mine for a few years.

There’s one more museum to explore in the walled city and then we take a taxi back to our starting point and lunch in Al Boom, overlooking the harbour.

As on previous visits to the Arab world we’ve been enjoying that overwhelming politeness, friendliness and feeling of being made welcome that seems to come with the territory. Even when I’m pulled over by the police (we’d stopped in a no-stopping zone to read a sign) the officer politely shakes hands with me before checking my licence and sending us on our way.