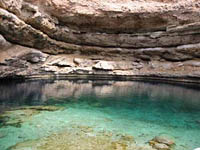 See it soon… the old rough-and-ready coast road to Sur, almost at the south-eastern end of the Arabian Peninsula, is disappearing. Already long stretches have been replaced by smooth tarmac and there’s lots of construction underway. Meanwhile the villages and towns along the often dramatic coast are still quiet little backwaters. So quiet that we began to think we were going to miss lunch, until we stumbled upon a restaurant in Tiwi with some of the best food we’ve had in Oman. Our empty stomachs were rapidly filled with rice, fish, chicken, salad, dhal and parathas for a mere US$3 each.

We worked off the lunch by walking up the beautiful Wadi Shab, a dramatic winding canyon running down to the sea. Most wadis are dry except after rainfalls, when they can fill up with amazing speed, bringing flash floods which can be deadly for the unwary. Wadi Shab seems to have plenty of water including some beautiful swimming holes further inland. As you progress inland the path gets progressively more precarious as it climbs higher and higher above the valley floor.

Unhappily the development that will inevitably come with the new road has already hit the Bimmah Sinkhole. This dramatic limestone hole is still a great place for a swim and a snorkel but now it’s ringed by an ugly stone wall, reached by an ugly concrete stairway and surrounded by picnic shelters and winding pathways. 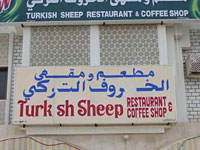 At Sur we went in search of the engaging named Turkish Sheep Restaurant and to our amazement discovered there were two of them.