My recent Australian travels featured the climb up Mt Kosciuszko, visits to three ‘big cities,’ Canberra, Sydney and Brisbane, stops at smaller centres, the Hawkesbury River, Byron Bay & Tweed Heads, Longreach and Winton, the train trip from Brisbane to Longreach and the dinosaur excursion from Winton to Lark Quarry. Finally I returned to Brisbane and made the boat trip out to Moreton Island. 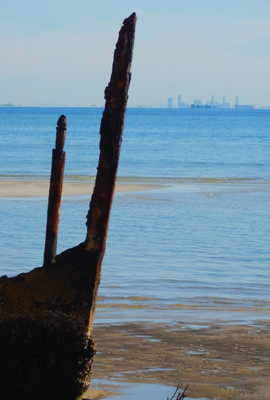 ▲ Moreton Island from the approach into Brisbane. The sandy patch in the middle of the island is The Desert, popular for sand-tobogganing.

Moreton Island and nearby North Stradbroke Island enclose Moreton Bay off the city of Brisbane. They’re a familiar sight to flights arriving and departing to and from Brisbane. This was my view of Moreton Island as I arrived from Melbourne.

◄ There are assorted shipwrecks, most of them deliberate, around the island. From these wrecks at Shark Spit on the west coast I could look back to Brisbane, 37km away. 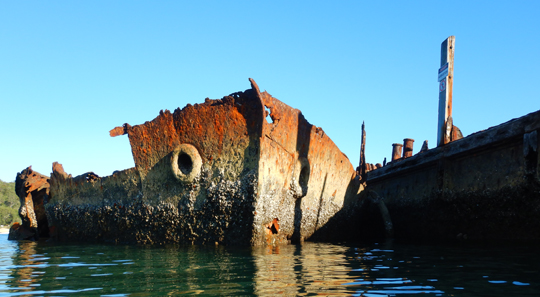 ▲ Just north of the Tangalooma Resort, where I stayed, the Tangalooma Wrecks form a breakwater for visiting yachties and a popular snorkeling or even scuba-diving site. 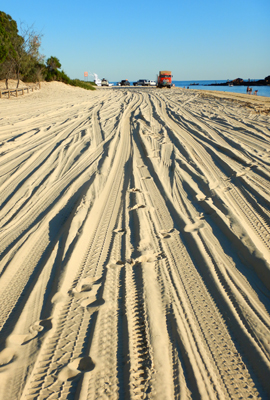 ◄ Vehicle tracks on the beach, heading south to the Tangalooma Wrecks

Like the bigger and better known Fraser Island further north, Moreton Island is a sand island. There are no sealed roads anywhere on the island, sandy tracks cross the island at various points, but most of the time it’s a matter of driving along the beach. Lots of people bring their 4WDs across from Brisbane and camp on the beaches or at campsites around the island. Real 4WDs that is, you don’t see any city street SUVs. 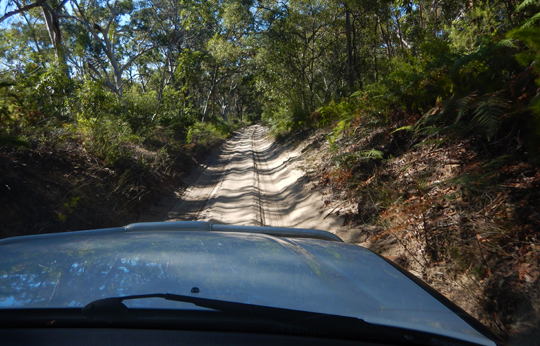 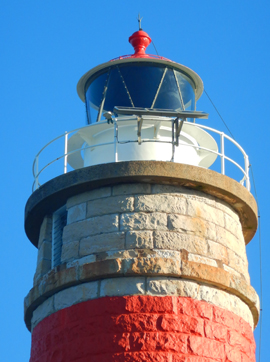 ▲ I rented a Land-Cruiser to explore, this is Middle Rd which crosses the island in, well, the middle. It’s effectively a dual highway, built by American forces stationed on the island during WW II. It’s drive-on-the-right, they never got around to switching it back to the correct – for Australia – side after the war. 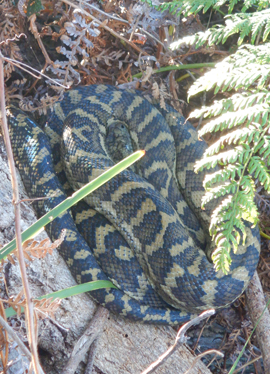 ◄ Close to the Cape Moreton Lighthouse I encountered what was clearly a rather large python. I’d like to have seen it uncoiled, stretched out to reveal just how big it was. Moreton Island may have plenty of reptiles, but mammals aren’t so common. At night you might spot bandicoots (and mistake them for rodents) or possums and there are a variety of bats and gliders, but none of those Fraser Island dingoes. The island does have introduced cats, pigs and goats although I never saw any. In the waters around the island there are plenty of fish, but also whales in the appropriate season. You’d have to be lucky to spot a dugong, but dolphins turn up every night at the Tangalooma Resort for a free meal which resort visitors can help to hand out. 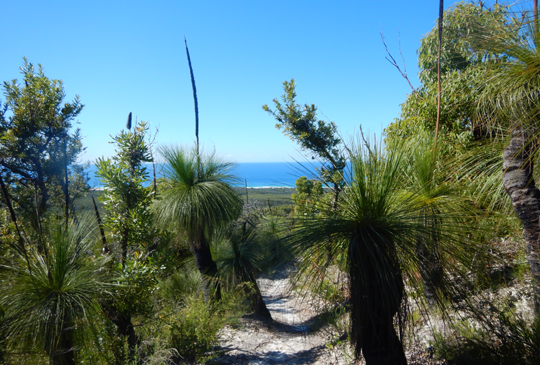 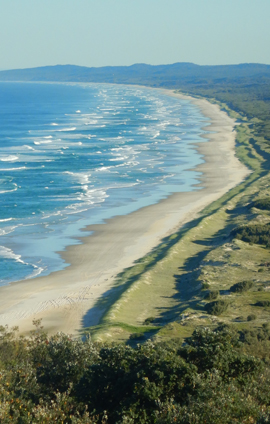 ▲ There are some good walking tracks on the island, like the ascent of Mt Tempest. The track to the top is fringed by the grass trees which used to be known as ‘black boys.’ My visit to Mt Kosciuszko a few weeks earler took me to the 2228metre top of Australia’s highest peak. This time I made the 285metre ascent of what is claimed to be the highest coastal sand dune in the world.

▲ Where I stopped in for lunch at The Gutter Bar, the island’s only pub. 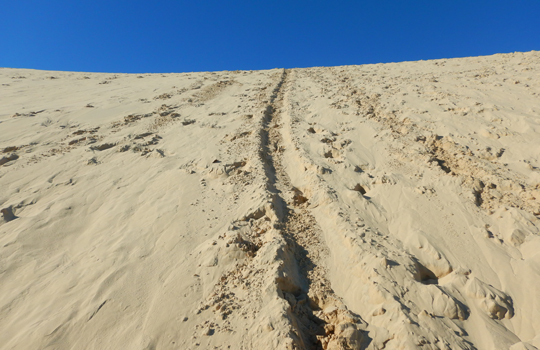 ▲ Apart from The Desert there are sand spills falling down to the beach at various places. 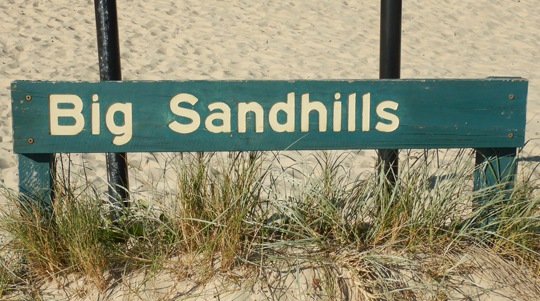 ▲ This one on the east coast was appropriately labelled Big Sandhills.

▲ Finally Moreton Island can turn on pretty good sunsets. The one from my room’s balcony was even better than from down on the beach