Last year I visited the Kimberley Coastal camp and blogged about the amazing Aboriginal art around the camp. Last week Maureen and I were back there again. And once again I was simply blown away by the variety and quantity of Aboriginal art in the area. Like this handprint, a technique common in Aboriginal art throughout Australia.

A group of us travelled up the Lawley River, a wide mangrove-fringed creek with lots of birdlife (wading birds in particular including a big, awkward looking jabiru) and the occasional crocodile sunning itself on the mudbanks. You’re regularly warned about the dangers of encountering a croc on even the most innocuous stretch of water. On my last morning I walked down to a nearby beach and this one surfaced like a submarine just a few feet away. 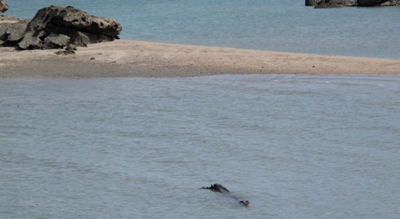 Back on the Lawley we have to wait for the tide to rise a bit so we can clear a rocky bar across the river and then, as the river bends off into the rocky country we left the boat and walk for a couple of km inland. There’s still plenty of water flowing down the creek, but soon it will dry up to waterholes and billabongs and then dry even more before the next wet season arrives.

We reach a burial site – the body was covered with rocks, later the rocks were cleared and the bones removed. From there it’s on to a series of art sites, with some impressive Bradshaws/Gwion Gwion figures, mixed, as usual, with the later Wandjina figures.