Burma is so tightly packed with Buddhist sites – brand new ones as well as the ancient ones – and visitor numbers are still so comparatively low that it’s easy to stumble upon something new every time you visit. This trip Maureen and I ventured south-west of Mandalay to the area around Monyway and visited three amazing sites: 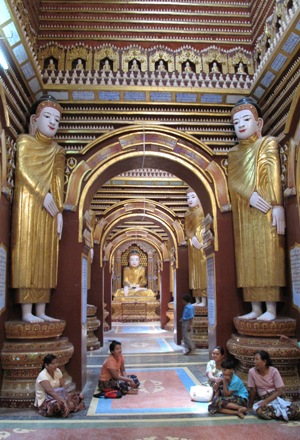 Thanboddhay Paya is comparatively new – built between 1939 and 1958 – but it’s definitely a work in pro- gress. The square temple is packed with Buddha images from big down to tiny, 582,363 in total according to the official count.

They keep getting damaged or broken (squirrels knock the small ones off the shelves?) and need replacement. Which you can do at 20 tiny ones for US$1, or 10 slightly larger. Larger again by negotiation. All of this in a design which varies from completely over-the-top, to flashing neon lit, to exuberantly kitsch. I absolutely love it and so, it appears, do the crowds of Burmese visitors. 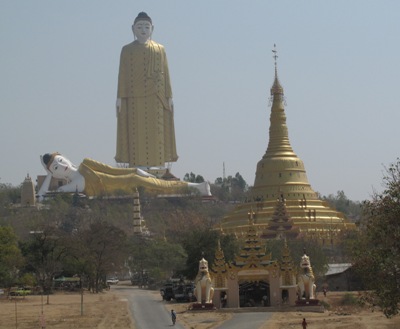 Not far away is the even newer Bodhi Tataung – well it’s brand new – a gigantic (423 feet, 129m high) standing Buddha, topping a hill and looking down on a 312 feet/95m long reclining Buddha. And beyond that row after row of seated Buddhas, over 5000 of them in all. The standing Buddha has a non-functioning lift and some rather tatty stairways leading up to the 17th floor (we are told, we only ascend to about nine or 10). There are windows right up to the top, 31 floors, but you can’t see out so why bother? 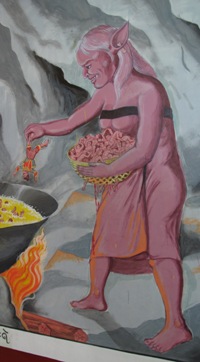 The floors as far we ascend are all illustrated with large and amateurishly painted illustrations of gruesome tortures and deaths in some sort of Buddhist hell. 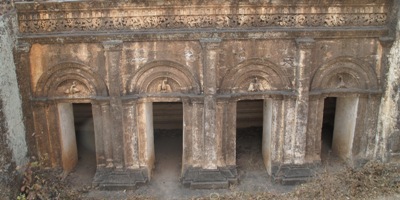 The Hpo Win Daung Caves date from the 14th to 18th century, a series of cave temples, rock cut like Ajanta and Ellora or the Ethiopian churches. The Buddhas inside are alternately damaged and disappeared , but it’s a great site and, like everything on my Monywa circuit, more striking because I’ve never heard of them before.