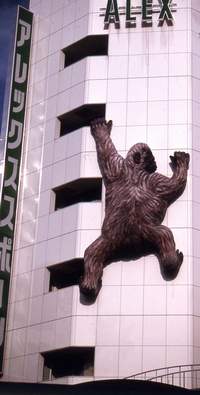 Unleashing movie monsters on cities is a sure fire crowd pleaser (think New York City and King Kong), but no monster has destroyed as many cities to as much general acclaim as the great Japanese movie monster Godzilla. In fact having your city destroyed by Godzilla is such a great publicity stunt and tourist attractor that Japanese cities compete to be destroyed.

The original Godzilla movie in 1954 saw the low budget king lizard destroy Tokyo and establish the basic theme which all Godzilla movies have successfully followed: put a guy in a rubber suit and send him out to stomp on model buildings.

Eventually Godzilla tired of destroying Japanese cities and moved on to New York and Paris (where he did the Arc de Triomphe no good at all) in Destroy all Monsters (1968). A higher tech Hollywood version destroyed New York again in the 1998 Godzilla, but things got back to the Japanese basics when Sydney was whacked in the 2004 Godzilla: Final Wars, which saw the genuine Japanese Godzilla triumph over the American impostor. By this time Godzilla had done his worst in more than 20 films.

The original Godzilla was, in fact, a nuclear warning, the dormant giant lizard had been stirred into action by American nuclear testing in the Pacific. The American remake of the film, a quarter century later, cast the French as the careless nuclear power. At a Godzilla exhibit in a museum in Kawasaki a city official summed up the Japanese enthusiasm for their home grown monster when he announced that as a special favour ‘Godzilla has agreed to lay waste to the city of Kawasaki and destroy everything in his path.’