Mobile Phones
I use an extremely battered old Motorola mobile (cell) phone. It doesn’t take photographs, it looks ancient but it works all over the place. I’ve made or received calls on that phone on every continent except Antarctica. Travelling from Singapore to Shanghai in April 2005 I was in phone range every km of the way. On a bus between Battambang and Phnom Phenh in Cambodia I found myself sitting next to a text-messaging monk. On the other hand travelling from Cape Town to Casablanca in Africa in November my phone only worked in two countries (South Africa and Morocco). Every other country we visited – Namibia, Angola, Gabon, Cameroon, Central African Republic, Benin, Ghana, Mali – had cell networks but my service provider (Vodafone) only had an agreement with Namibia and we weren’t in range there.
In most places, of course, it’s cheaper to simply get a local sim card. LP author Nick Ray commented that he was a guy with ‘more than 15 sim cards in his wallet ranging from Rwanda to Indonesia. And I’m not even a part-time drug dealer.’

Insect Repellent & Paint Stripper
Our trip through Africa last November took us through places with not only fierce strains of malaria but also trypanosomiasis or sleeping sickness which is spread by the tsetse fly. So we were careful to slap on the insect repellent every time we stepped out. Riding in the back of a pickup truck in Gabon one day we realized that Maureen’s Bushman Plus repellent was not only keeping mosquitoes and tsetse flies at bay it was also dissolving the black paint on the truck side rail! The only way to get the paint off her hands, it turned out, was to apply more repellent. 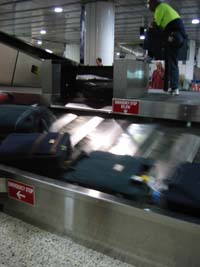 Departing, Arriving
It’s not the flight, it’s the pre-departure and post-arrival activities which drive you crazy, especially going through security and collecting baggage.  Why do 90% of airport screening facilities give you an area about the size of a desk for crowds of people to simultaneously unpack laptops from bags, remove keys-phones-coins from pockets, fold up coats, etc? At one Italian airport last year the X-ray machines had long conveyor belts leading up to the machine, so there was plenty of space and time to go through the organizing operation. Could more airports please do something about making security clearances easier?

Some airports (Singapore’s Changi for example) always get your baggage to you quickly and efficiently. Others collapse into chaos on a regular basis. Unhappily I’d include Tullamarine Airport in Melbourne in that category. Arriving in the early hours of Friday 2 December 2005 a single 777 was enough to bring the baggage handling equipment grinding to a halt. Repeatedly logjams of baggage built up and the system shutdown. Eventually someone reluctantly came over to kick the conveyor belt back in to operation. Nobody – apart from some of the passengers – tried to rearrange the bags on the overcrowded belt. Nearly an hour after we’d landed our bags finally emerged. Makes you wonder how Tullamarine is going to cope with the Commonwealth Games in Melbourne in March.