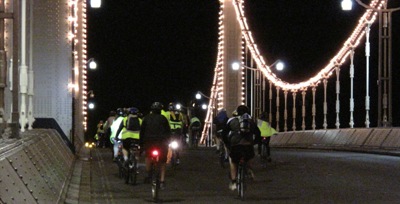 I’ve been doing a lot of cycling in and out of London. I reported on my Boris Biking experiences, the new London bicycle share scheme. Correctly it’s the Barclays Cycle Hire scheme and I’ve racked up about 10 hours of London exploration on assorted Boris Bikes. Boris Johnson is the colourful London mayor and the bikes have been tagged with his name.

Then I jumped on my own new Specialized bike and pedalled off from London to Paris, a very enjoyable three-day ride. 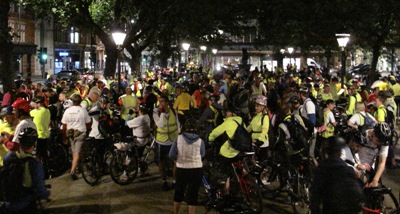 ▲ The riders assemble at Sloane Square just before midnight.

Then it was back on my own bicycle, along with nearly 400 other night riders, to pedal from London to Brighton on the south coast. We assembled in Chelsea’s Sloane Square and set off south at midnight. With a half way refreshment stop and one off course excursion (ie I got lost) a short distance earlier I arrived in Brighton, with the early finishers at dawn, around 530 am. I’d covered exactly 100km (63 miles) and I was on a train back to London soon after 6 am.