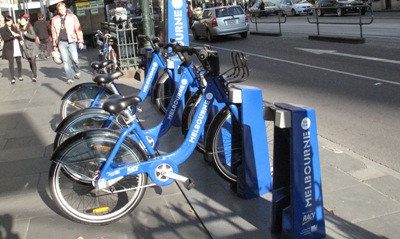 Bike share systems are being rolled out in more and more major cities around the world. ‘White bicycles’ were tried in England in the hippy ‘60s, but they were all soon stolen. Years ago I tried a more modern incarnation in Copenhagen (make them ugly, instantly recognisable and equip them with strong locks seemed to be the way to stop them all disappearing to Poland, as reportedly they did in their first year). 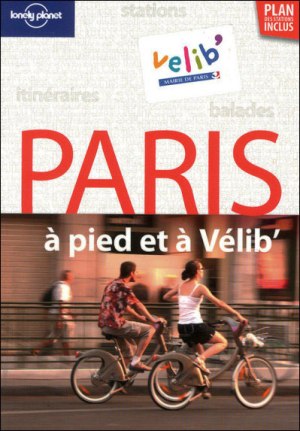 I visited Paris in 2007 just as their Vélib’ program was launched, I blogged about it at the time. There are now 20,000 Vélib’ bikes in Paris, scattered over more than 1600 stations. Our French publishing partners have even published – in French of course – a guide to exploring Paris by Vélib’.

Me in Melbourne this week ▼ 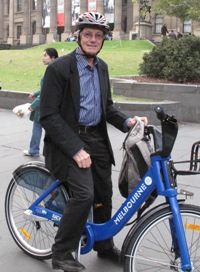 In Melbourne, my home town for half the year, the Melbourne Bike Share scheme was launched on 31 May with 100 bicycle available from 10 city docking stations. A rapid rollout will expand to 600 bicycles at 50 stations within two months, by the end of July 2010. Will it work? Well the bicycle share system in Melbourne has a big problem: the compulsory helmet use law. This is the first city to launch a bicycle share scheme where riders will have to turn up with their own helmet. 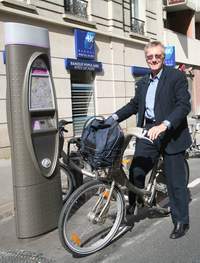 I tried out one yesterday, swiped my credit card for the A$2.50 day charge, keyed the assigned PIN code into a bicycle stand and pedalled off on my sturdy three speed bicycle in its sexy shade of French racing blue. The real French Vélib’ bikes are grey, but colour apart the experience was very similar. The first half hour is free and I’d returned the bike to another station well within the 30 minute window.