Close to the equator the climate doesn’t change much with the seasons in Colombia, but it sure does with the altitude. I’ve always thought of Kathmandu, at 1300 metres, 4300 feet, as a useful rule of thumb for city heights. So between the hot and steamy Caribbean coast of Colombia and Bogota, the often chilly capital, at 2600 metres, two Kathmandus high, I’m also visiting Medellin, at 1540 metres a bit higher than the Himalayan city.

In Colombia’s bad days Medellin was the baddest. Once upon a time this city could claim to have the highest murder rate on earth and it was headquarters for the cocaine cartel whose leader, Pablo Escobar, was so proud of his business and so unconcerned about government interference he had a light plane mounted at the entrance to his property. Today Medellin is a different proposition and, once again, there’s lots of the work of the city’s other best known citizen, Botero, on display. The plaza across from my hotel has noore than 20 Botero sculptures on display and in the Museum of Antioquia, looking out over the plaza, Botero meets Escobar. One of his paintings in the museum shows the drug lord going down under a hail of bullets, freeze framed against the sky.

Santa Fe de Antioquia
Just 80km from Medellin, most of them downhill so it’s much hotter, this small town has preserved its old charm with imposing churches looking out over town squares. Soon after emerging from the museum of religious art, where I’d been admiring the religious figures used in parades, I meet a real one, a local school parade carrying young boys dressed as the apostles and a very serious young Virgin Mary on platforms. 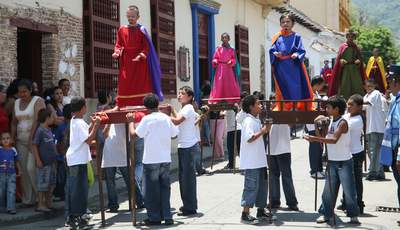 Schoolchilden prepare to tote the disciples in a religious parade 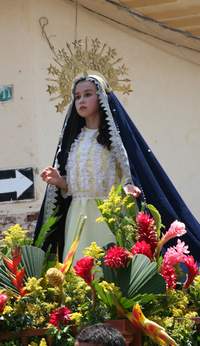 Puente de Occidente
Five km out of town the century old Puente de Occidente, ‘bridge of the west’ is a local attraction and there’s an incongruous fleet of Indian Bajajs, the subcontinent’s three-wheeler autorickshaws, waiting beside the cathedral in the main square, their pilots outfitted in Hawaiian shirts, ready to zip you down to the bridge.

Crossing the bridge in an Indian autorickshaw