My Burma trip included a return visit to Mandalay, my first visit was 36 years ago in 1974! Despite many changes over the years – Mandalay is regularly cited as the city where Chinese economic influence is most evident – it’s still an extraordinarily Buddhist city and a very photogenic one. 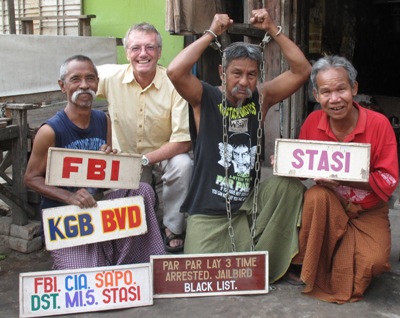 First stop? I dropped in on the traditional a-nyeint pwe performers the Moustache Brothers. From left to right that’s Lu Maw, me, Par Par Lay and Lu Zaw. The latter two brothers (actually brother and cousin) were sentenced to seven years imprisonment for telling jokes about the military government. Fortunately they’re out now and although they’re forbidden to make public performances that doesn’t stop them giving ‘demonstrations’ every night for tourists.

Mandalay is renowned for its wonderful wooden architecture although the palace buildings were all burnt down during the closing battles of WW II. Shwe In Bin Kyaung Monastery – the ‘teak monastery’ – dates from 1895.

There’s always a cool, exotic feel to the entranceways into Burmese temples, this is the Kuthodaw Paya which features 730 little stupas, 729 with stone slab ‘pages’ covering all 15 books of the Tripitaka. Stupa, number 730 has a slab detailing the paya’s construction. 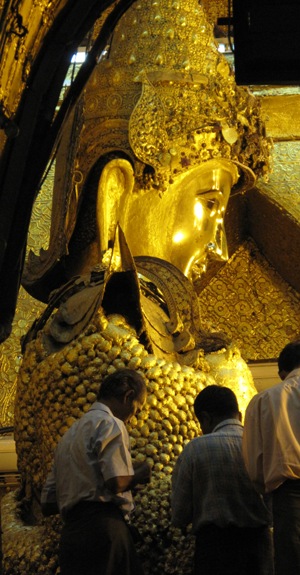 Mahamuni Paya is the most important site in Mandalay with a venerated Buddha image disappearing under an infinite number of little squares of gold leaf pasted on by devotees. Male only, women are not allowed to approach the image. 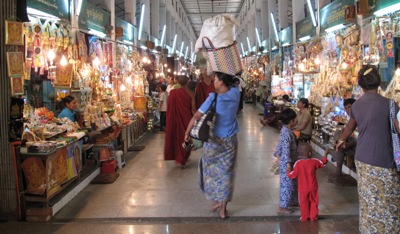 The entranceway to the Mahamuni – like so many of the arcaded entranceways – features a long selection of stalls selling all sorts of religious paraphernalia. I bought a Buddha snowdome. 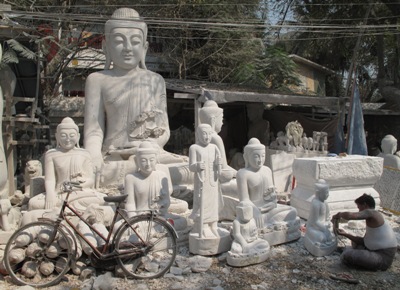 Near the Mahamuni is a street devoted to marble Buddha sculptors.

Much loved (and even more photographed) U Bein’s Bridge features on the cover of Amitav Ghosh’s The Glass Palace and is also the cover picture on our current Myanmar edition 10 guide. The long teak walking bridge crosses a shallow lake in very picturesque fashion. 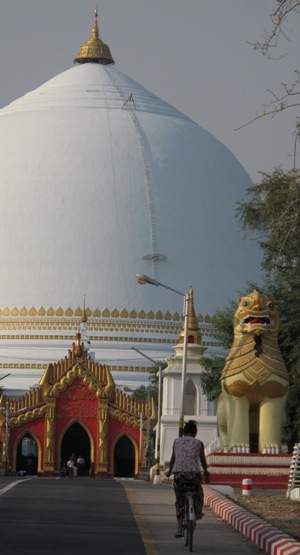 Out of town and across the river the Kaunghmudaw Paya has been dubbed the ‘queen’s tit stupa,’ reportedly she ripped open her blouse and said ‘make it look like this,’ when the king couldn’t make up his mind what form the stupa should take. Silicon enhanced?