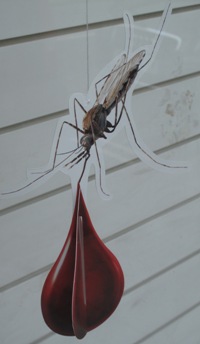 Over the years I’ve travelled in many malarial regions and taken plenty of anti-malarial drugs. Touch wood I’ve never had malaria, but malaria can take a long time to present, so my travels in Africa earlier this year could still effect me. I certainly know I’ve been at risk because I’ve travelled with people who were less careful or even less lucky and came down with malaria.

Our advice and suggestions for protecting yourself against malaria has evolved and developed along with changes in the dangers, the protection advice and the anti-malarial drugs available. Check our Asia & India, Africa or Central & South America health guides for more information.

Earlier this month I went to a briefing on malaria put on at the London office of the Financial Times. The FT has put out a report on Combating Malaria.

The briefing was chaired by the Malaria Consortium, the world’s leading not-for-profit in the ongoing struggle with malaria. Some interesting facts:

The worst place in the world for malaria today is Nigeria. Out of 250 million malaria cases world wide probably 50 million of them are in Nigeria. In fact Nigeria is not quite the worst place on a per capita basis, but it is very bad and it’s got a huge population (150 million). Nine out of 10 of the worst countries on a per capita basis – places where 350 to 450 out of every 1000 people have malaria – are in Africa. The one non-African country is East Timor which comes in at number two.

Three countries in Africa have made major efforts to fight malaria in recent years and as a result reduced the malaria death rate by more than 50% – Ethiopia, Eritrea and Rwanda. Which still leaves Ethiopia as a place with a big malaria problem.

Resistance to the latest anti-malarials always seems to develop first along the Cambodian-Thai border. Every wave of resistance has kicked off there – first of all to chloroquine drugs in the 1960s, then to sulfadoxine/pyramethamine in the 1970s, to mefloquine in the 1980s and there is concern that resistance to Artimisinin – the current wonder drug as ACT (Artimisinin Combination Therapy) – may also be developing there. It’s a case of lots of malaria, lots of people taking anti-malarials and lots of those people not taking them properly – either not completing courses or taking inferior versions of the drugs.