I’ve got a final morning at the PATA conference, followed by lunch with some friends at Fernando’s, a classic Portuguese seafood and barbecue place on the beach. I’m a little concerned about finding a taxi back towards the centre of Macau to catch the ferry to Hong Kong, but in fact one turns up as soon as I leave the restaurant and zips me to the terminal so quickly I manage to get on an earlier boat.

My Turbojet ferry rockets across the mouth of the Pearl River which separates Macau from Hong Kong. I rocket through Hong Kong’s highly efficient immigration department equally quickly, and then the MTR subway rockets me under the harbour to pop up in Tsim Sha Tsui, the southern tip of Kowloon, where I’m staying the night.

For old times’ sake I have a look in the Peninsula Hotel (the most expensive place in Hong Kong) and, right across the road, Chungking Mansions, home for most of the city-state’s really cheap places to stay. The last time I photographed the Peninsula’s Rolls-Royces there was a flood in the basement parking garage and they were all written off a week later. 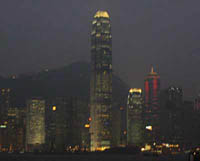 First of all, however, I track down a ticket for the bus to Xiamen tomorrow. Clearly this is not a service much used by non-Chinese, because the ticket is completely in Chinese. It gives you a pretty good feeling for what it’s like to be illiterate but I’m pretty sure it’s for the right place. Although there’s no bus station, I’m told the bus will be outside the Kowloon Tong MTR station, ready to go at 7.30am tomorrow.