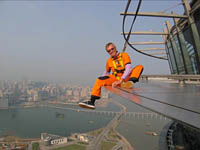 I’m in Macau for the Pacific Asia Travel Association’s (PATA) annual conference, a get-together of people from airlines, hotels, tourist offices, tour operators, travel agents and assorted other travel people from all over the region. There are panel discussions about where aviation is going and where Chinese tourism is going. Answer: more of China’s 130 cities with more than one million population will soon have airports and the number of Chinese who currently travel overseas will soon grow from 30 million to 100 million.

I take part in a rather confused discussion with British botanist David Bellamy and Canadian futurist David Suzuki on sustainable tourism. David Suzuki’s view is that if all the new aircraft that the airlines talk about buying get built, and if that number of Chinese do start travelling, there’s going to be no world left to sustain, so why worry about tourism.

PATA also hands out Gold Awards in various categories, and Lonely Planet’s new East Timor guidebook picks up the gong in that category. I’m impressed by the Pacific island nation of Palau’s award for their efforts to stop shark finning. This is the horrific practice of catching sharks, chopping off their fins and throwing the still living creature back into the sea to die. The fins end up as shark-fin soup, and unfortunately, rapidly escalating Chinese affluence and their enthusiasm for this gourmet dish is having a devastating effect on Pacific shark populations. 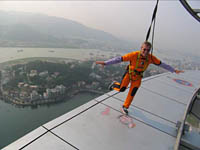 I even manage to see a bit of Macau, including the view from outside the top of the 338m-high Macau Tower. AJ Hackett, the New Zealand bungy-jump inventors, stuff you into an orange suit, belt you to an overhead rail and let you walk right around the outside at the top. You can even sit on the edge and dangle your feet over the 1000-foot drop.

Tomorrow I’m off to Hong Kong and then back in to China on the final leg of my journey to Shanghai.