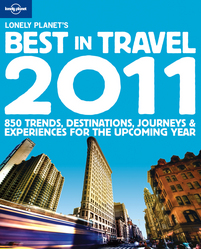 Lonely Planet’s Best in Travel 2011 stirred up the usual interest on its release. Assorted cities (including Tel Aviv and Australia’s Newcastle – not the British version) noted their inclusion in the ‘Top 10 Cities’ category. US Secretary of State Hillary Clinton, visiting Wellington in New Zealand in early November, announced that she was pleased to be in the ‘Best Little Capital in the World,’ a direct quote from our report on the city.

When Italian newspaper La Repubblica asked me to comment on the ‘Top 10 Regions’ listing I was surprised to discover I’d been to eight of them. Egypt’s Sinai Peninsula, the Istria region of Croatia, Cappadocia in Turkey, Westfjords in Iceland, Australia’s Great Barrier Reef, the US West Coast, Chilean Patagonia and Indonesia’s Gili Islands all have a tick beside them on my list.

▼ with Maureen at Prestsbakki in Westfjords, Iceland

I’ve still got to visit Scotland’s Shetland Islands and the Marquesa Islands of French Polynesia. The need to get to the Marquesas was underlined when I visited the Gauguin Exhibition at London’s Tate Modern Gallery a couple of months ago.