Day 1 of my London-Paris bike ride took me from London down to Seaford on the south coast of England. Day 2 was the short ride to Newhaven followed by the ferry to Dieppe and a 50km cruise along the wonderful Avenue Verte cycle track to Forge les Eaux. Click here for the Day 1 story.

It’s not an early morning start the next day, the village clock is chiming 9am as I pedal out of Forge les Eaux and it’s a good job I enjoyed my petit dejeuner because for the rest of the day I come up against the great summer problem in France. In August everything shuts down and the whole country goes on vacation. Ideas of sitting in a pleasant village café at lunchtime go out the window, nothing is open, not a corner shop, not a patisserie, nothing. Lunch is the bar of chocolate I bought in a supermarket back in England.

Still the riding is fine, pleasant back country roads, very little traffic, perhaps as many passing cyclists as cars, pretty little villages popping up as regular as clockwork.  The village of St Germer de Fly has a wonderful looking church but at 1pm I roll into St Crépin Ibouvilliers, where I’d thought about stopping for the night. Too early, too short a ride (63km) and the village is too dead. Wisely I carry on, if I’d stopped today would have been too short and tomorrow too long. 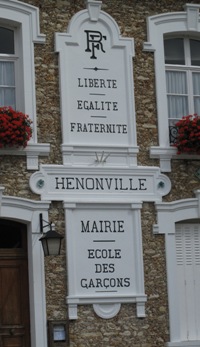 But can I find anywhere to stay, village after village is not only slumbering through summer, but also lacking any accommodation? Grisy at 83km has a restaurant, but by then I’m too late for lunch although a Coca Cola sugar rush certainly helps my legs keep going. So I pedal another 33km to Poissy, a Parisian outer suburb where I find a business-like Ibis Hotel and pack away Italian food and a half bottle of red. 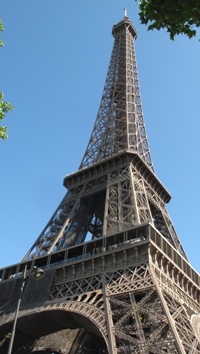 On Day 4 I’m checking my map, only 5km down the track, when a French cyclist comes by and suggests I follow him on his morning ride to work. So I have a traffic free cruise down a maze of back alleys and picturesque short cuts to the edge of the city. I just have a final climb and then the drop down to Pont Suresnes bridge (my third Seine crossing for the morning) and through the Bois de Boulogne (lots of cyclists out training) and there I am with the Eiffel Tower just across the river.

I lived in Paris for a year in 1986 so I ride by the flat we rented on Rue St Paul in the Marais district. The flat where Doors singer Jim Morrison died was just 100metres away.

My current bicycle, my old apartment ▼ 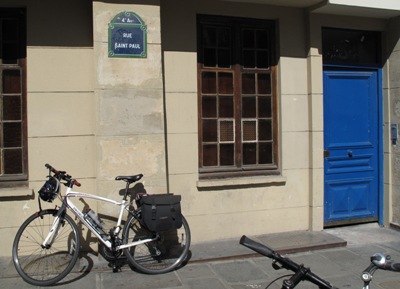 One of my favourite local cafes, L’Ebouillanté on rue des Barres, still turns out great bricks – a North African dish rather like a savoury crepe – and I sat there in the sunshine feeling very pleased with life.

L’Ebouillanté with the picturesque church of St Gervais in the background. ▼ 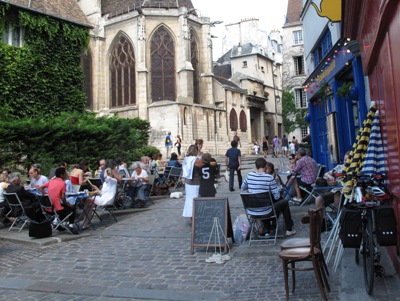 Finally there’s the short ride to the Gare du Nord railway station, get on the 513 pm Eurostar and at 626 pm I’m back in London with just a 7km ride home.

Total US$507 – throw in another US$43 on breakfasts, snacks, newspapers, drinks and I spent US$550 on four days between London and Paris and back, three hotel nights, three dinners, one ferry trip, one high speed Eurostar journey.