I’ve bought a new bicycle (a Specialized Sirrus, flat bar road bike, 30 speed, some carbon fibre, very nice) so why not break it in by riding to Paris? The idea that I could just roll out of my front door and end up at the Eiffel Tower was too good to miss.

▲ Cycling on the Avenue Verte bicycle track in France

Plus there’s the Franco-British Cycle Plan, a scheme to put together a bicycle route following cycle tracks or minor roads all the way between the two capitals. So with the excellent Cycling Country Lanes & Byways (Sussex & South Surrey) map in my pocket and some additional research I left home at 620 am on Tuesday, crossed Westminster Bridge past Big Ben at 650 and followed the National Cycle Network Route 4 along the Thames to Greenwich. Except there were absolutely no Route 4 signs and no Route 21 signs to tell me it was time to turn south.

I floundered around south-east London for far too long (at one point a bicycle track sign pointed toward Catford (which was on my route) only to be followed by another bicycle track sign to Catford pointing in completely the opposite direction. 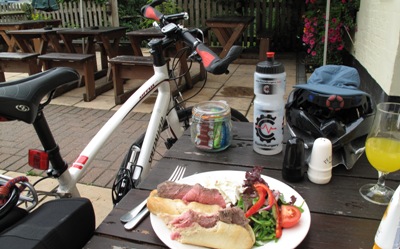 ▲ My bike, my lunch at a Route 21 trackside pub

Finally I abandoned the route, plotted my own back road route and eventually intercepted Route 21. Most of the rest of the way it was pretty well signposted and the 23km Cuckoo Trail, following a disused railway line, was a delight.

The Sussex Downs (which seemed to be up more than down) weren’t so nice and the weather wasn’t very special. I arrive at Seaford around 530pm, I’ve covered 149km and I really need that beer.

Next morning it’s just 6km along the coast to Newhaven and the 930am LD Lines ferry whisks me across to Dieppe in four hours. I pedal off the ferry and almost immediately find a sign for the Avenue Verte (Green Way) cycle route. About 10km from Dieppe at Arques-la-Bataille I join the Avenue Verte cycle track and for nearly 50km follow this delightful track along another old railway route. There’s a river nearby, pretty little villages by the route, lots of old railway buildings, a real chateau and absolutely no traffic at all, apart from other cyclist, in-line skaters and walkers. 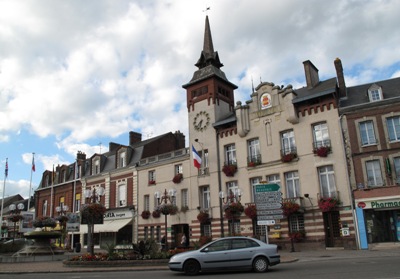 Still I’m glad to get to Forges-les-Eaux for the night and a meal to remind me that the French can do really good food when they put their mind to it.