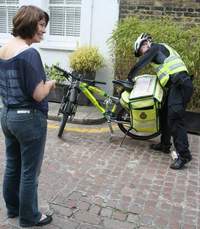 Maureen and I have recently acquired a house in London which we’re using as a base for the European side (as opposed to the Australian side) of the world.

On Saturday afternoon I managed to trip over a chair, fall full length across the room, crash my head against the corner of the wall and arrive on the floor bleeding profusely. Maureen did the British thing, called 999 and asked for an ambulance. Ten minutes later medical assistance arrived. On a bicycle.

It makes perfectly good sense, I wasn’t about to die, I could find my own way to a hospital to get stitched up and he probably arrived faster than a real ambulance would have found its way through Saturday afternoon London traffic.

We leave for Venice tomorrow on the Orient Express.