Last year I made a stopover in Doha, the capital of Qatar, while I was travelling back from Europe to Australia. I wanted to have a look at what the site for the 2022 Football World Cup had to offer. Answer? Not much.

This year, en route to India, I stopped off in Kuwait. It doesn’t win many favourite Middle East oil nation awards, but it is rather more interesting than Doha. For a start there’s the oddly named Kuwait House of National Works Memorial Museum – which could have been better named the Iraqi Invasion Museum. It’s essentially a sustained rant about the bloody Iraqis and their assault on Kuwait in 1990 and subsequent expulsion in 1991. Meanwhile anything they couldn’t steal they wrecked. It’s not a pretty story, much of it illustrated by models of parts of Kuwait City with nasty Iraqis demolishing things. ▼ 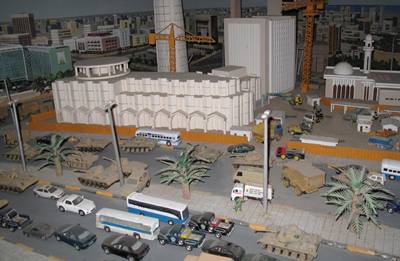 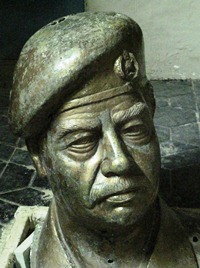 ◄ The museum tour concludes with a Saddam Hussein head, chopped off one of those statues which got hauled down during 2003 invasion of Iraq. There are quite a few other museums worth having a look at around the city although you could skip the National Museum, they’ve had 20+ years to put it back together after the Iraqis did their steal and trash act, but although the reconstituted collection has gone travelling to the British Museum in London and to the Metropolitan Museum of Art in New York, they haven’t yet got around to making their own museum a must see. 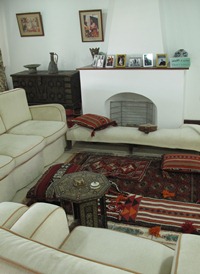 ◄ White with blue trim, Beit Dickson was the home of British political agent Colonel Harold Dickson and his wife Violet, a real Kuwait fan. Freya Stark lived here for a spell in 1937 and the close-to-the-waterfront house is a rare example of colonial architecture in Kuwait. Sadu House, with its fine weaving exhibits, is another old house, right next to the National Museum. Four of the old (although only around 1920) city gates survive, the city walls were all demolished in 1957. 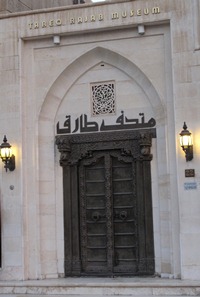 Even better is the Tareq Rajab Museum, a private museum a few km out from the city centre. The owners hid their marvellous collection from the thieving Iraqis by bricking up the entrance door to the basement display area and scattering rubbish down the stairs to disguise its presence. There are ceremics, manuscripts, some weird and wonderful old guns, costumes, miniatures and a quite stunning collection of folk jewellery from right across the Middle East and Asia, up into the Himalaya and down into South-East Asia.  ►

Still more time on your hands? Well explore the Souq, investigate the history of dhow building and the pearl diving era at the Maritime Museum, have a quick glance at the Museum of Modern Art, visit the Kuwait Towers and the Liberation Tower (although for some reason the observation decks at both of them were closed), walk the Corniche (although temperatures were sailing well past 40°C during my visit) and if you’ve got time go out to the Al-Qurain Martyrs’ Museum for more on those horrible Iraqis. Plus there’s a surprising choice of restaurants. No alcohol, though. 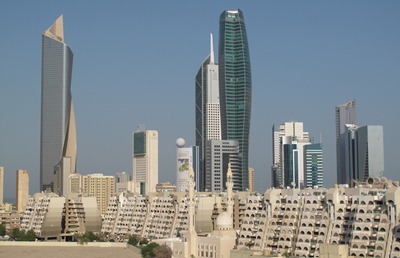 ▲ Or you can just admire the city skyline. Getting around Kuwait can be a challenge, I have never been anywhere with taxi drivers with so little knowledge of where you wanted to go. I suspect it was less a lack of navigational ability than the fact that tourists are so infrequent and as a result taxi drivers have never heard of the National Museum. Or that Iraqi Invasion Museum – fortunately a helpful Thorn Tree discussion featured the GPS location: 29° 21.225’ N, 47° 56.741’ E which led me right there. To find the Tareq Rajab Museum head for the Hadi Clinic, taxi drivers know that. I found my way back to my hotel by asking for the KFC! Fortunately taxis are cheap.