I’ve been travelling the Congo, starting with a visit to Lubumbashi in Katanga Province. From there I went to the capital Kinshasa and made a sidetrip across the Congo River to Brazzaville the capital of the ‘other Congo,’ the Congo Republic. Then it was back to Kinshasa and on to Kisangani, flying with Hewa Bora Airlines on a Boeing 727-100 complete with a little plaque to show it had rolled off the Boeing assembly line in 1965. 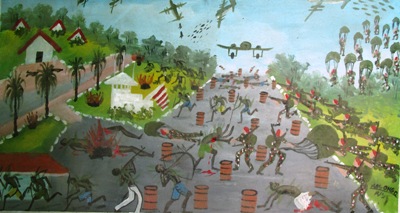 ▲ Kisangani is the town at A Bend in the River – although town, river and even country are never mentioned by name in V S Naipaul’s book. This painting of Belgian paratroopers arriving in the town in 1964, when the chaos after independence was at its worst, is in Les Chalets, the popular foreigners’ hotel in the town. This was the incident which led to that famous journalist’s query ‘anybody here been raped and speaks English?’ Of course back then this was Stanleyville, named after the explorer Henry Morton Stanley. 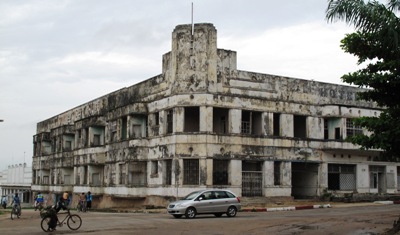 ▲ Hotel Les Chutes  is another reminder of the Belgian era, it’s derelict today and I couldn’t find out when that happened, I suspect fairly recently, during the ‘Great War of Africa’ which devastated so much of  Congo DRC, Kisangani in particular. Click here to see a site with photographs of the hotel in its Belgian prime, back in 1957. Chutes is ‘waterfall ‘ in French and the Stanley Falls (now the Boyoma Falls) are just upriver from Kisangani and mark the end of the long navigable stretch of the Congo River up from the capital Kinshasa.

▲ There’s lots of activity on the Congo River at Kisangani whether it’s local canoes shuttling across the river or larger boats arriving and departing from further downstream. Plus the big barges which go all the way to Kinshasa, a 1750km trip – ‘le descente c’est deux semaine,’ they told me on the docks. So it’s 2 weeks down to the capital, but count on 5 or 6 weeks back upriver.  For a long spell during and after the war Kisangani was cut off, with no river traffic and the roads impassable supplies were often short in the town. Now the barges are running again and you can always get a Primus beer or even French wine if you need ‘une verre de vin rouge.’ 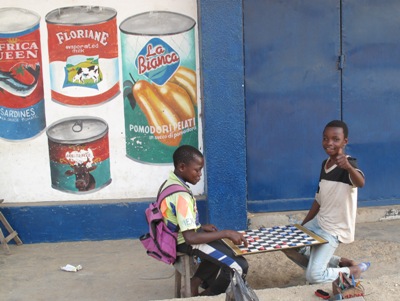 ▲ Kids outside a food shop. 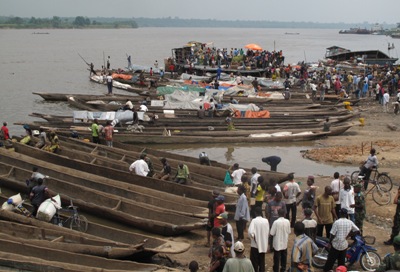 ▲ These canoes all shuttle across the river to the other side, I took one over to look back at Kisangani from across the Congo. 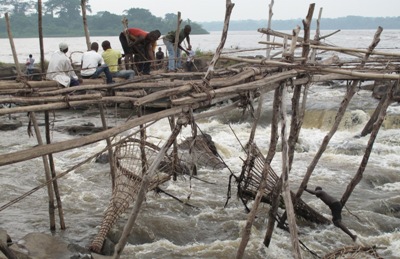 ▲ Just upriver from Kisangani the Wagenia fishermen catch fish with these conical nets set in the waterfalls.

▲ Diamonds are a big business in Kisangani today, they’re just another indicator of the enormous wealth waiting to be dug up in this often shattered country.  They’re one of the reason for the private jets you’ll see at Congo airports. Although diamond buyers – like this one named ‘Peace of Christ’ – advertise their presence around town it’s a secretive business and outsiders are not welcome. 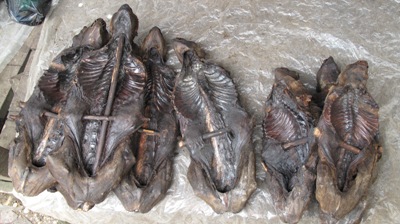 ▲ The war killed millions of people and also had a devastating effect on the environment. Driven from their villages and farms many people were forced to become hunter gathers, foraging for a living in the jungle. The taste for ‘bushmeat’ is a major concern for environmentalists. I saw this line up of smoked monkeys  in the market in Kisangani. Killing the odd monkey for village consumption is one thing, when hunters come in and wipe out whole troops of monkeys to ship down to Kinshasa it becomes a big problem.