Montreal is the 3rd largest French speaking city in the world, Paris the 2nd. Number 1? That’s Kinshasa, stop two on my Congo Democratic Republic excursion. As a degree of stability returns to much of the country, railway lines reopen and roads are improved (often from impassable to merely ‘very bad’) land travel is becoming possible again, but you should allow a couple of weeks to cover the 1600 km (straight line) distance between Lubumbashi, my first stop, and Kinshasa, the capital. I took the easy way out, I flew with Hewa Bora Airways, Swahili for Good Wind (not a bad name for an airline) and the biggest airline in the country.

Kinshasa isn’t exactly heavy with ‘must do’ sights and attractions, but there’s enough here to keep you busy for a few days and just soaking up the atmosphere of an African mega-city makes a visit worthwhile. It’s definitely a city where you need to keep on your toes, it may not be the terrifying disaster zone over-excited reports might claim, but a little care doesn’t go astray whether it’s watching not to fall into man-sized holes in the street or keeping out of the way of the ever-grasping and far too numerous police. 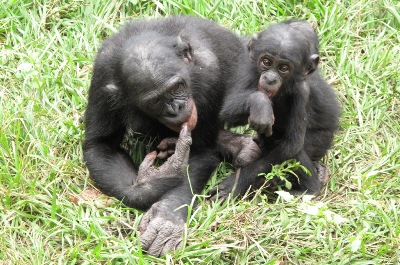 ▲ The high point of my Kinshasa stay would have to be visiting the Lola ya Bonobo Sanctuary about 30km out of the city. For a long time bonobos were thought to be just undersized chimpanzees until it was realised they were an entirely different species and found only in Congo DRC. The sanctuary looks after – and studies – orphaned bonobos. A year ago I reviewed Vanessa Wood’s fascinating book Bonobo Handshake for Australian Book Review and that certainly sparked my interest in these intriguing animals. Their matriarchal society and ‘make love not war’ attitude (chimpanzees are more prone to war) provides plenty of interest to academics. I bumped into Dr Zanna Clay at the sanctuary, Google her name plus ‘sex’ and ‘noise’ to find more about one interesting result of her studies! 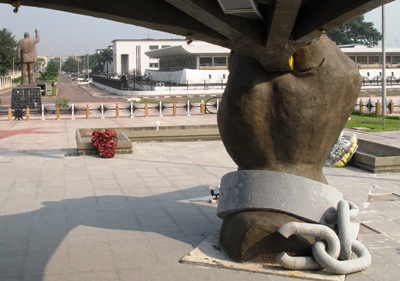 ▲ Laurent Kabila overthrew longtime ruler Mobutu in 1997 but was assassinated in 2001. His mausoleum in front of the Palais de la Nation, from where his son Joseph Kabila now leads the country, features these giant hands holding up concrete ‘palm leaves’ over his tomb and it’s fronted by a large statue of the late ruler. 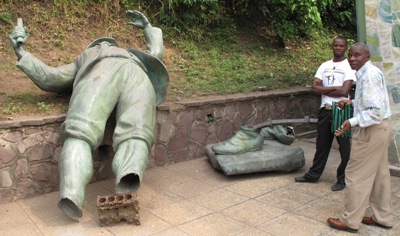 ▲ Kinshasa’s Musée National is in limbo-land awaiting funding to properly house its extensive collection. I was hoping to see Henry Morton Stanley’s Congo River steamboat, said to be rusting away in a museum courtyard. It’s been shunted off to the navy dockyard to be restored. There is, however, this statue of Stanley looking as if it’s suffered the sort of indignity the US Army’s art appreciation squad used to reserve for statues of Saddam Hussein. 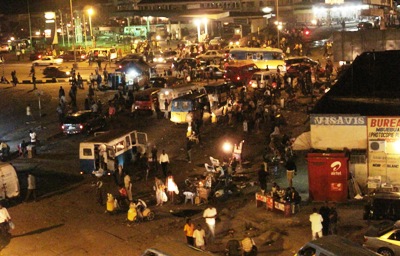 ▲ Catching some Congo music is another important part of the Kinshasa experience. I’ve no idea who I was listening to on  the rooftop terrace of Hôtel La Créche, but they were good! Looking down from the terrace I had this view of the Rond Point Victoire, transport hub for the Matonge district of the town. 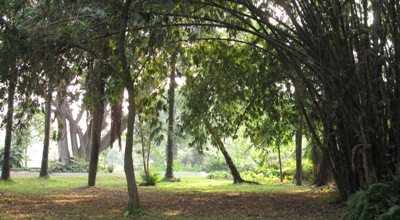 ▲ If you want a break from Kinshasa’s noise, confusion and crowds you could do worse than retreat to the Botanic Gardens. The 1000 CF entry charge (just over US$1) keeps everybody out. I counted about 20 people in the entire place. As a foreigner I had to pay 2000 CF.