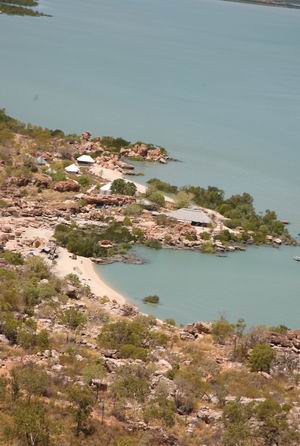 My recent Flying Across the Kimberley blog took me to the Kimberley Coastal Camp on the coast of Admiralty Gulf. Check it on Google Earth, it’s about as remote as you can get:

To get there we had that two hour flight in a Cessna 210 light aircraft to the Mitchell Plateau Airstrip, from where it was another 20 minutes by helicopter to the camp. 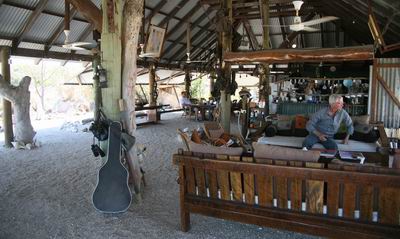 The camp is absolutely simple, there’s not a piece of glass anywhere, the floors of your room are sand (well shells more than sand), the toilets and showers are open air. But the situation is stunning and the food is terrific. Don’t plan on staying there in 2010, however. It’s the hot end of the dry season right now, the wet season is just round the corner and right after our visit the camp closed down for the season. It reopens in March 2010.

Visitors to the camp come for two reason: fishing and/or art. I’m not a fishing enthusiast although I’m happy to eat them and the barramundi were superb. But the Aboriginal rock art is superb and it’s dotted all around the camp and on the coast. 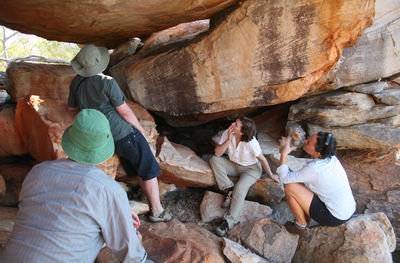 Furthermore the Aboriginal presence goes back a long time. Our rock art explorations took us to some fine examples of Bradshaw and Wandjina art. 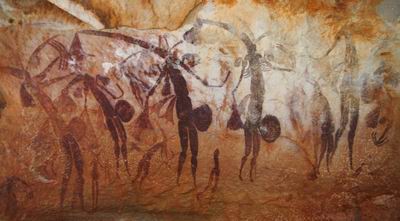 The older Bradshaw or Gwion Gwion paintings. The English name comes from Joseph Bradshaw, a late 1800s pastoralist turned rock art hunter who first categorised and labelled the paintings. It’s uncertain how old they are or who did them, but today’s Aboriginals sometimes comment that they’re ‘not by our mob.’ Which can be a controversial statement as it conflicts with Aboriginal claims that they’ve been around forever and their claim to Australia stretches back to the beginning of human settlement. Bradshaw figures fall into several periods, the later more simplified figures where hunting rather than ceremonial activities predominate may indicate a period of climate change when food supplies dwindled and hunting and food gathering became increasingly important, leaving less time for ceremonial activities. Bradshaw paintings are usually in ‘galleries,’ often rock faces protected by overhangs. 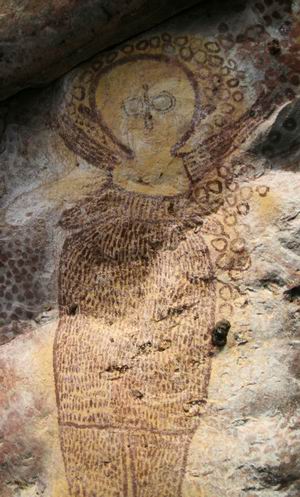 The later Wandjina figures are more varied in their subject matter, their design and their colours, but lack the subdued, calm, elegance of the Bradshaw figures. They are more often in everyday living areas as opposed to the Bradshaw galleries. Clearly at one time there was a large Aboriginal population in the area, they left huge middens (piles of shells from long forgotten shellfish feasts) at many of their sites.