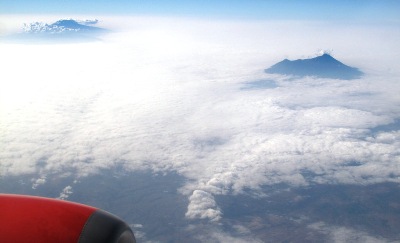 ▲ Sometimes you look out the window and the view is magic. Like the morning a couple of weeks ago when I flew with Kenya Airways from Nairobi to Lubumbashi in Congo DRC. Soon after departing Nairobi there, off to the west was Kilimanjaro just poking up above the clouds and, soon after, Mt Meru a little to the south. I climbed Kilimanjaro back in 2007 and had a great time.

I’ve just spent several weeks kicking around Congo DRC with a sidetrip to the other Congo, Congo Republic (aka Congo Brazzaville). My central African trip kicked off at Lubumbashi in Congo DRC, continued on to the capital Kinshasa, jumped across the mighty Congo River to Brazzaville in the Congo Republic, then headed upriver to Kisangani, the town on the ‘bend in the river’. Finally I continued east to Goma to track gorillas and climb the amazing Nyiragongo Volcano. I’ve reviewed King Leopold’s Ghost, the excellent book on the Congo I read while I was there, and also posted some Congo Information on the practicalities of travelling in the region and commented on how lucky I was not to have flown on Hewa Bora airlines a week or so later than I did.