The Yarra River is so tranquil as it flows past my place, close to the centre of Melbourne, Australia’s second biggest city, that it’s hard to believe there are rapids further upstream. 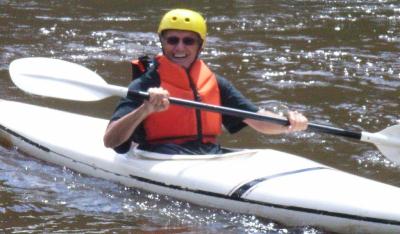 I’ve been out on the Yarra – the ‘muddy Yarra’ as it’s usually described – with Ian Penrose, the Yarra ‘Riverkeeper’ before, but on the lower reaches and in a boat with an outboard. This time I joined Ian and his Project Officer, Rod Ingham, for a spell of kayaking. We put in at Wittons Reserve and paddled about 5km downriver. We’re well into the summer now and the water was only just deep enough to get over the rocks, there were a few hard thumps, but it was good fun getting past Bob’s Rock, Island Rapid and other Upper Yarra obstacles. I managed to not tip out, although I did get pretty wet. In fact we all got pretty wet.