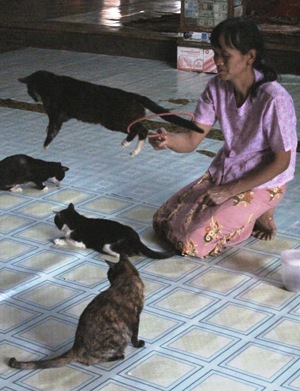 At Burma’s Inle Lake tourists flock to the ‘Jumping Cat Monastery.’ As a break from meditating the monks trained their cats to jump through hoops, which turned Nga Hpe Kyaung into the most popular monastery on the lake. The monks seem quite relaxed about it although it’s a woman who wields the hoops and dispenses the Whiskas. The cats seem quite relaxed about it too. They laze around in cat-like stupor until the rattle of the Whiskas box signals that more tourists have arrived and the cats instantly galve into action for a few jumps, a handful of Whiskas and then it’s back to sleep.

Much more recently Inle has gained another cat-attraction, genuine Burmese cats. In the turmoil of WW II and its aftermath pure bred Burmese cats disappeared from Burma. U Ohn Maung, the owner of the Inle Princess Resort on the lake and the man behind all sorts of projects around the lake from orphanages to medical clinics, decided it was time to reintroduce the Burmese cat to Burma.

So where do you go to find a Burmese cat today? The pet shop in Harrods in London of course. Getting them out of Harrods seems to have required some subterfuge, they won’t sell pets if you’re not a UK resident. The four cats were flown to Hong Kong and introduced to three more from Sydney in Australia. Then it was on to Inle Lake where it seems they have bred more like rabbits than cats. There are lots of them (50 or so) around now, although most are desexed so the strain is kept pure. At the Burma Cats Café, just north of Nampan at the southern end of the lake, you can have lunch and meet the friendly cats. They aren’t going anywhere, you can only reach the café by boat.