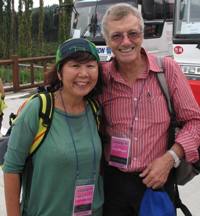 Maureen and I went to Jeju, the holiday island dangling off the southern end of the Korean Peninsula, for the World Trail Conference, a get together for walking trail organisers and administrators from around the world.

While we were in Jeju we walked three days of the Jeju Olle trail. Dreamt up by local walker Suh Myung-sook, after she’d walked the famous Camino Santiago in Spain, the first sections of the trail only opened in 2007. Today it goes almost all the way round the island and with side-trips and walks on smaller, adjacent islands there are now 24 comprehensively waymarked trails. 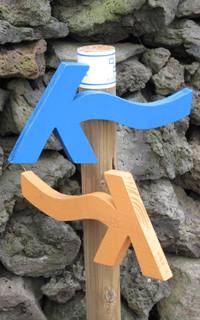 The Jeju Olle Walking Festival, which kicked off last year, is a four day festival along the trail with local events, performances, food stalls and other attractions. Maureen and I walked the 14km Route 7 of the trail with thousands of Korean walkers, braving grey skies, wind and occasional showers. 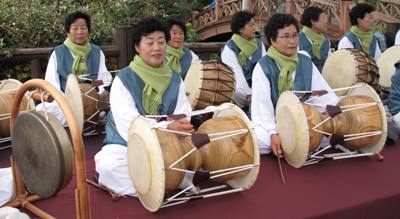 We also continued along the coast on 15km Route 8 which passes the major tourist resort at Jungmun, where the Trail Conference was held. Finally we walked the 18km of Route 14-1, a more remote and mountainous side trip section where we hardly met another walker all day. On that section we walked with Han Biya, a very well known Korean writer whose books have sold millions of copies. Daughter of the Wind, her four volume best seller, covers her 3-1/2 year trip around the world, much of it on foot, and she has also walked South Korea from south to north, all the way to the DMZ, the border with reclusive North Korea. 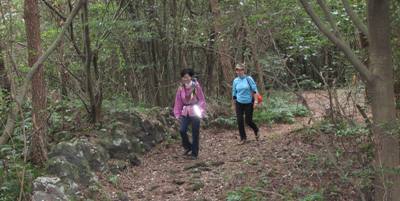 Other walking trails represented at the conference included – in alphabetical order:

• The Appalachian Trail – America’s iconic 3500km east coast walk, Bill Bryson wrote about the walk in his book A Walk in the Woods.
• Bruce Trail – A 900km Canadian trail following the edge of the Niagara escarpment.
• Camino Santiago – The Way of St James, famous Spanish pilgrim trail which follows an assortment of routes all converging on the cathedral at Santiago de Compostela. I reviewed Unholy Pilgrims, a book on walking (and drinking) the trail, earlier this year.
• Great Ocean Walk – 100km walk along the coast of the Australian state of Victoria. I walked part of the walk a few years back and I’ll be walking the rest of it next year. Check Richard Everist’s book Great Ocean Walk (I wrote the foreword!) for more info.
• Lebanon Mountain Trail – a recently launched 440km route that walks almost the entire north-to-south length of the country in 26 stages. Didn’t realize Lebanon was that big!
• Milford Track – New Zealand’s iconic Fiordland South Island walk is just 53km long.
• Norfolk Coastal Path and Peddar’s Way – Two British walks to the north-east of London, together they stretch for 150km. I walked a little bit of the Norfolk Coastal Path when I stayed with friends at Wells-next-the-Sea a year ago.
• Romantic Way in Germany – Stretching from Würzburg to Füssen through Bavaria and Baden-Württemberg in southern Germany the Romantic Way can be driven, bicycled or walked, count on 440km if you walk it.
• Shikkoku 88 Temples & Nature Trail – Japan’s fourth biggest island has a Nature Trail and the famous 88 Temple pilgrimage trail around the coast of the island. Count on 1200km if you intend to visit the whole temple list.