January in Melbourne, the one month of the year when the city’s famously changeable weather settles down for two weeks of absolute uniformity. It’s always hot-hot-hot for tennis at the Australian Open. The tennis also turns Melbourne into an international city, on the courts and amongst the spectators.

Last night it was Australian Samantha Stosur beating Czech Klara Zakopalova in a woman’s first round match (a surprisingly long match considering it went in straight sets to Stosur). Then it was number one seed Rafael Nadal (Spain) beating Christophe Rochus (Belgium) again in straight sets, but this time very quickly. I’m always for the underdog but poor Chrisophe didn’t have a chance. 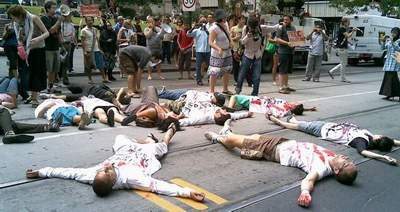 Gaza protest on Swanston St, the main street through the centre of Melbourne

Then today it was something much more serious, although with a smaller crowd. Israel and Palestine facing off in the streets of Melbourne, a protest against the Israeli demolition job in Gaza. It was also the first Barrack Obama protest I’ve encountered, his inauguration was less than 12 hours ago, but why hadn’t he sorted out the Middle East yet?