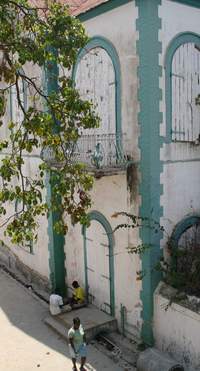 I’ve been travelling Haiti and Jacmel was my second stop. The town is regularly cited as the most popular in Haiti and has lots of fine old houses with a distinct New Orleans flavour, even if many of them are crumbling. Right by the town square the Hotel Manoir Alexandra is unfortunately not open for business because it’s the fictional home of Hadriana Siloe, Jacmel’s best known inhabitant. The beautiful Hadriana died at the altar on her wedding day, but wait, this is Haiti, home of voodoo, so is she really dead? Oh no, she’s been turned into a zombie. England may have its haunted houses, but Haiti has a zombie hotel. It’s against the law in Haiti to turn somebody into a zombie.

Jacmel is only 40km, in a straight line from Port-au-Prince, it’s much further by the winding road. The first stretch follows the coast before it climbs up into the mountains and as the Haitian proverb goes: dèyè mòn, gen mòn – after the mountains, more mountains.

Like Port-au-Prince there’s a Marché de Fer, an ‘iron market,’ because of the old cast-iron market building. It’s equally frenetic, just a little more manageable in scale. Apart from all the goods on sale, with vendors often incredibly specialised so there are lots of them, look for other market personnel like the wheelbarrow guys who generally rent their wheelbarrows by the day and will push your goods away if you’ve been on a heavy shopping spree.

I’m staying just out of town on Cyvadier Plage with a great view over the little bay from my balcony. To get back and forth to the town I jump on a tap tap.

Click here for more on Port-au-Prince, my first Haiti stop