Before my recent trip up the Karakoram Highway through northern Pakistan to Kashgar in China I spent a day on a side trip to the Murree hill station and looking around Islamabad. On my last visit to Pakistan in early 2006 I went to the ancient Buddhist site at Taxila, close to Islamabad, as well as spending some time up in the disaster zone from the late-2005 earthquake. 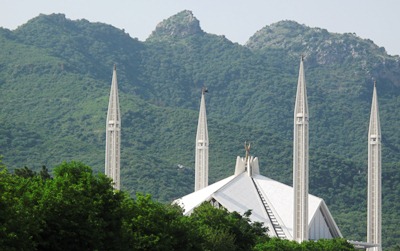 ▲ This time I visited the impressive – and huge – Shah Faisal Mosque, financed by a gift from Saudi Arabia. As the news was all about ‘angry Muslims’ protesting about the ‘anti-Islamic American movie’ on the surface it seemed like a bad time to be a non-believer visiting the biggest mosque in Pakistan’s capital city. Of course the reality was people welcoming me to the country and pleased I had come to their religious centre. Islamabad is a new, planned capital city – rather like Brasilia in Brazil, Washington DC in the USA or Canberra in Australia. In fact it reminded me most of Canberra, a sprawling city clearly built for car drivers and surrounded by hills. You can see them in the background to the mosque. 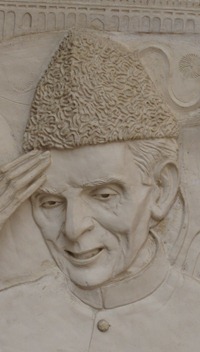 ▲ The Pakistan Monument on a hillside in the Shakarparian park to the south of the city is a great viewpoint to look out across the city. The mosque comes into view on the other side of the city.

◄ Bas reliefs of people and events from Pakistan’s history and of important buildings feature at the site. Here’s Muhammad Ali Jinnah, the country’s father figure.

On my previous visit to Islamabad I stayed at the Marriott Hotel and my blog mentions the cricket game going on while we were in the hotel’s lobby restaurant. The Pakistanis are great cricket enthusiasts and the nail-biting game between South Africa and Australia distracted every waiter in the restaurant. 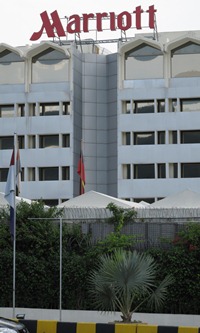 Sadly two years later in September 2008 many of the restaurant and front office staff at the Marriott were killed when a suicide bomber drove a truck packed with explosives up to the hotel. Although it didn’t get through the security gate the explosion was so huge it still caused huge damage and the ensuing fire virtually destroyed the hotel. You can see the truck arriving at the gate in CCTV footage in a You Tube clip. Today a suicide bomber wouldn’t get anywhere near the hotel, security at top hotels in countries like Pakistan is way more serious than anything we are used to in the west.  ►