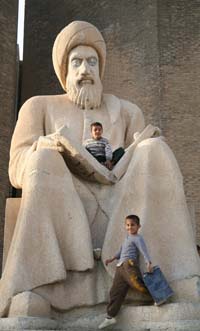 Iraq Practicalities
You would have to be crazy to visit central or southern Iraq and even the north is not for beginners but if you did want to go, here’s how to do it:

Visas
Officially any visitor to Iraq needs a visa and they are not available on arrival, even at Baghdad airport. In practice you can just turn up at the border in the north and they let you in without any form filling or money changing hands. The only catch, so I was told, is that in Turkey you must never say you’re going to Kurdistan. It’s Iraq you’re on your way to visit.

Getting There
There are now direct flights to Arbil from Dubai, Istanbul, Beirut and Amman and also direct flights to Suleimani. By land you have to get out to Diyarbakir in the east of Turkey. From Istanbul it’s a 1-1/2 to 2 hour flight costing about US$100, there are several flights a day. From Diyarbakir it’s easy to get a taxi to the border, about a 300km drive. Make sure they are taking you across the border to the Kurdistan Ibrahim al-Khalil border post, not just to Silopi, the Turkish border town 10km or so before the border. It should cost about US$150 including the customs and border fees the Turkish driver has to pay. In fact I paid more in one direction and less in the other.

I don’t see any reason why you couldn’t walk across the border, which should be much faster since you wouldn’t have to go through all the car paperwork and car searching procedures. But the border is very confusing and the driver will know which office to go to and what stamp to get. My driver even knew where to go in Silopi to get my passport photocopied.

Getting Around
There are minibuses which seem to run from town to town and plenty of taxis in each town. It’s no problem to get a taxi to take you on to the next town, but it’s not cheap, mainly because fuel is expensive. Most of it seems to be sold, quite openly, on the black market, in 20 litre plastic containers sold from the roadside. The locally produced Iraqi fuel is half the price of fuel from Turkey or Iran but nobody wants the Iraqi fuel because it’s of such low quality.

Money
Forget credit cards or ATM machines, this is cash country. US dollars for preference, euros also happily accepted, other currencies can also be exchanged.

Hotels
There are lots of hotels, in fact an amazing number of them. I didn’t run around checking out places and I think I was generally staying in ‘better’ quality places costing around US$35 to US$50. They were usually clean although pretty ordinary, but I could have stayed much cheaper. In Arbil (aka Erbil) the Erbil International Hotel (usually referred to as the ‘Erbil Sheraton’) was around US$150 and could have been a Sheraton anywhere in the world.

Food
The food was standard Middle Eastern/Eastern Mediterranean, fresh and usually served out in very large quantities. A complete meal typically cost US$5 to 10. On a couple of occasions lunch was so filling all I could fit in for dinner was a Turkish style doner-kebab sandwich for less than US$1.

Security
Perhaps everything was happening behind my back but I never felt uneasy except when we were skirting Kirkuk. Even wandering out of my hotel to find an internet café late at night felt OK. There is a lot of security, regular check points along the road and big ones at the edge of the larger towns, but the checks were mainly of the ‘who is in this car?’ variety. Kurds and a westerner (me), no problem. If you were an Arab it would probably be a very different question.

The Slovenia Question
It seemed to be on everybody’s lips: should we (or could we) ‘do a Slovenia,’ jettison the rest of Iraq before it all turns to shit. Like Slovenia did with Yugoslavia before the shooting started. Answer: the Kurds would love to and probably could without much difficulty if it wasn’t for the presence of Turkey and Iran, each with their own Kurdish minorities and both strongly opposed to the idea of an independent Kurdistan.