Recently Maureen and I visited the National Library of Australia in Canberra, a visit which included a spell in their map department looking at some very interesting maps. 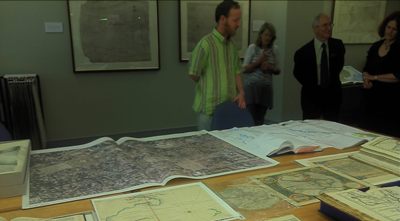 ▲ Looking at maps in the National Library’s map room

We looked at an Indian Ocean navigation chart from the Dutch East India company, essentially it shows a big empty expanse of ocean to the east of Africa, Sumatra (well mapped) up in the top right corner and the vague hint of the worrying Western Australia coast down in the bottom right. There were over 3,000 Dutch voyages across the Indian Ocean in that era of which only four are known to have collided with the Australian coast, most famously and disastrously in the case of the Batavia in 1629.

What’s particularly interesting about this chart is that it has the daily positions marked on it. Usually at the end of a voyage the positions would be erased and the chart re-used. So we can see the vessel rounded Cape Hope, then meandered around for awhile in mid-ocean looking for an island. Hardly surprising, the difficulties of calculating longitude were not solved until accurate clocks arrived, Captain Cook on his first great voyage was a pioneer in their use. Later there was more mid-ocean meandering, possible because of a storm, then the voyage continued resolutely north-east, ending in India rather than Indonesia. The Western Australian Maritime Museum in Fremantle, the port for Perth, has excellent exhibits concerning the wrecks, in particular the Batavia.

▲ The worrying Western Australia coast, although this is further north in the Kimberley

Brendan Whyte showed us his Bangladesh-India border map and the Cooch Behar problem. At partition in 1947 they couldn’t reach an agreement on the border and 92 bits of Bangladesh ended up inside India and 106 bits of India within the borders of Bangladesh. Of course it was East Pakistan, not Bangladesh, back then. Some of these exclaves (or enclaves depending on which way you look at it) are tiny pocket handkerchiefs of land but the Bangladeshi Tin Bigha Corridor covers 25 square km with a population of 20,000 people. 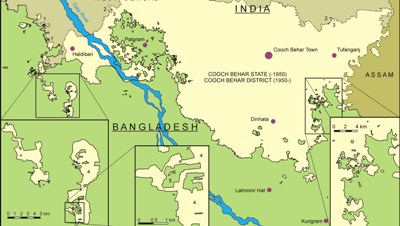 The problem with these colonial hangovers is that they’re politically and economically isolated. The Indians don’t run powerlines or extend other infrastructure into isolated bits of Bangladesh, or vice versa. The borders are a moveable feast in any case, when rivers wander back and forth with each monsoon a border down the middle of the river can easily end up on dry land in the following year.