At the Edinburgh Fringe Festival Dave Gorman’s Power Point Presentation looked at how ‘facts’ on the web can propagate. He may have been born a Christian and become an atheist, but when his Wikipedia entry described him as Jewish that ‘fact’ soon spread far and wide. He was not just a comedian but a Jewish comedian. 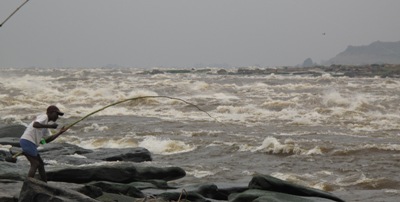 On my recent Congo travels I had a look at the rapids just downstream from Brazzaville. At this point, after the long navigable stretch downriver from Kisangani in the centre of the African continent, the Congo River starts its final downhill plunge to the Atlantic Ocean. ‘Could that be rafted?’ I pondered, looking at the watery turmoil. It turns out a National Geographic kayaking team has been through the rapids although I don’t know if they went through the really rough stuff on the Brazzaville side of the river.

Searching the web for Brazzaville, Congo River, rapids, white-water rafting, I also came up with several sites which referred to rafting the Congo River at Brazzaville as ‘a major hit with adventure enthusiasts’ although they also warned that you’d probably get wet ‘so it may be an idea to take with you an extra set of clothes.’ Looking at those rapids it seemed more probable than you’d die rather than merely get wet and I certainly hadn’t seen anything about white-water rafting trips while I was in the town.

The reality was somebody had written up an entry on Brazzaville while sitting in front of a computer which might as well have been a million miles from the Congo River. The author of this misinformation had found a piece on ‘Congo River Rapids’ and plugged that into his Brazzaville story. In fact those Congo River Rapids which are such ‘a major hit with adventure enthusiasts’ are an amusement park ride in Alton Towers, Staffordshire, England and, in a slightly different form, at Busch Gardens: Africa in Tampa Bay, Florida! They have absolutely nothing to do with Brazzaville in the Congo Republic. At Lonely Planet we’ve always said you only really find out about a place by going there and seeing it with your own eyes.