The Qantas A380 fleet is named after famous Australian aviators. Their first A380 was named after Nancy Bird Walton. That was the aircraft which suffered an engine explosion out of Singapore in 2010 and spent over a year on the ground in Singapore being repaired. Flying to Los Angeles a few days ago I was amused to see an A380 arrive at the gate with Reginald Ansett on the nose. Once upon a time Australia’s two airlines were Qantas and Ansett, named after its founder Sir Reginald. When Ansett Airlines went bankrupt just days after 9/11 they took a heap of my frequent flyer points down with them. I flew to LA on Charles Kingsford Smith, he made the first trans-Pacific flight from the USA to Australia in 1928.

Looking Out, Looking In
Soon after leaving Australia we passed just to the north of beautiful Lord Howe Island. Nobody was looking. Later in the flight we passed even closer to the south of Fiji, again most people are glued to their screens, window blinds down. 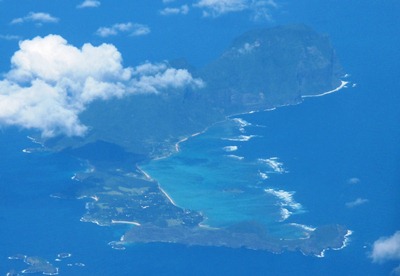 A380s have a great tail camera you watch on your screen, here’s the view of Los Angeles as we made our final approach into LAX. 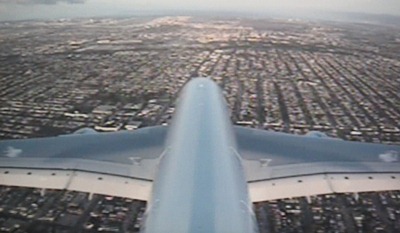 What do the crew like best about the A380 over the 747? The entertainment system is so much more reliable, they’re not having to constantly reboot the system, restart movies or, in my case, reboot the power system for laptops. It never seems to work reliably on 747s.