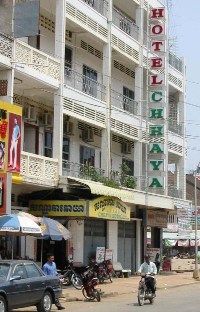 Last week I was in Macau speaking at a hotel conference, most of the conference was numbers and business,  but my talk was light relief, hotels I’ve loved and hated, whether they were cheap – the Chhaya Hotel in Battambang, Cambodia in 2005 was US$4 and just fine. Click here for my interesting stay in Battambang.

Or expensive, the Homestead at El Questro in the Kimberley region of Western Australia a year earlier was close to US$1000 and I loved it. 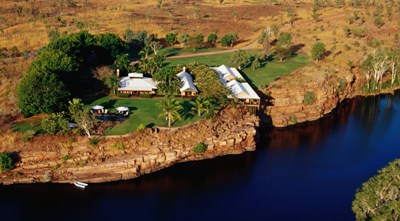 In Macau I  stayed at the Venetian Hotel where the conference was being held. Now the Venetian was not just straightforward fake, it was way over the top, tongue in cheek, exuberant, let it all hang out fake. I’ll have a Macau blog up in a couple of days and cover it there.

A lot of the hotel discussions were about top end places – the new Armani Hotel in the ‘world’s tallest building’ Burj Khalifa (originally the Burj Dubai) in Dubai for example. You can have a room there next week for US$462 a night. At the other extreme we heard about Tune Hotels, an offshoot of low cost airline Air Asia. They currently have seven hotels in Malaysia and one in Bali and are about to open a Tune Hotel in London. They’re talking about prices from US$10 (or less) although you pay extra for air-con (in Malaysia 80% of guests opt for air-con) or a towel (50% of guests decide to provide their own towel).

In between was Glow Hotel, a new group which aims to develop comfortable, modern three star hotels in Asia. Their first hotel, the Glow Trinity Silom, is open in Bangkok with rooms from US$60.

I travelled back to Hong Kong – zipping across the mouth of the Pearl River at a steady 75kph (50mph) in a high speed Cotaijet boat – and checked in to another hotel I’d heard about at the conference: The Upper House. Swire Hotels (the same people who own Cathay Pacific Airlines) are opening a series of expensive boutique hotels in China, Hong Kong and the UK, all with ‘house’ in the name. The Upper House is in the Admiralty district, just east of Hong Kong Central and sits on top of the Marriott Hotel on Queensway. It’s not cheap – my 47th floor room was US$395 a night – but it’s very well run, the rooms are big and extremely modern and the views are fabulous. In fact you don’t need to stay there to enjoy the views, try the bar at Café Grey on the 49th floor, it’s becoming a hip Hong Kong hangout. 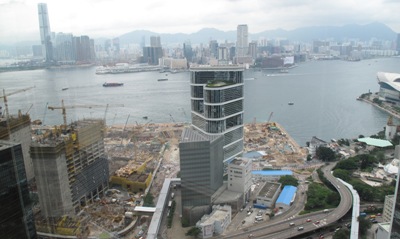 ▲ View from The Upper House

The next night I took the Star Ferry across to the Kowloon side and stayed at the much cheaper Luxe Manor Hotel in Tsim Sha Tsui. My room there cost US$140 a night and downstairs is the ‘jazzy’ (our Hong Kong guide’s description) Dada Bar which often has live music. While I was in Tsim Sha Tsui I dropped in for a nostalgic look at Chungking Mansions, ground zero for Hong Kong’s cheapest backpacker places, and I also had a drink in the top floor Felix Bar in the Peninsula Hotel. A stone’s throw from Chungking Mansions the Peninsula is the best known (and one of the most expensive) hotels in the city. Over the years I’ve stayed at both ends of the Hong Kong hotel spectrum, Chungking Mansions and the Peninsula.

Meanwhile, while I was talking hotels in Macau and being a tourist in Hong Kong, Maureen was watching operas (and visiting art galleries) in Los Angeles. She didn’t like her hotel at all (gloomy, cramped, badly equipped, poor service), so no kudos for the Millenium Biltmore in Downtown LA. You can have a room there next week for US$125 (a non-refundable special deal).