Someone is looking after me today. I’m running late and all I know about my bus is that it will be outside the Kowloon Tong MTR (subway) station. I get there at 7.25 for the 7.30am departure and it’s a big station with lots of exits. I sprint up the stairs at the first one I come to and there’s my bus, ready to go.

It takes nearly two hours to drive from Kowloon up through the New Territories to the Chinese border, get off the bus to clear Hong Kong exit immigration, get back on again, get off again at the Shenzen entry immigration and finally get on our way. Once we’re out of Shenzen and on the freeway we fly. The bus cruises along at 120 to 130kmph, occasionally overtaking a car transporter laden with shiny new Volvos on their way to newly rich Chinese owners. Or being overtaken by shiny new BMWs driven by their newly even richer Chinese owners.

Meals always seem to come with the ticket price on buses in China and today’s is at Shantou’s ‘glitzy International,’ the town’s ‘best top-end hotel’ according to the China guide. ‘Twenty minute stop,’ the bus conductor announces, but as soon as we’re seated the food starts to arrive and it takes a good half hour to get through chicken, fish, another sort of fish, shellfish, assorted vegetables, two different sorts of soup and finally sliced fruit. It’s more like a banquet than a cheap bus ride meal. 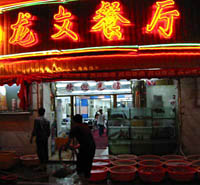 Xiamen is another gleaming, skyscrapered new China metropolis, but just a couple of minutes’ ferry ride from the waterfront is the island of Gulang Yu where the only vehicles on the roads are electric ones. 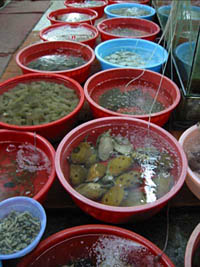 It has a resort town feel complete with lots of souvenir shops and a plethora of seafood restaurants with the creatures swimming around in plastic buckets or glass tanks, waiting to be eaten. This is a new China resort – however, there’s also a big McDonald’s.