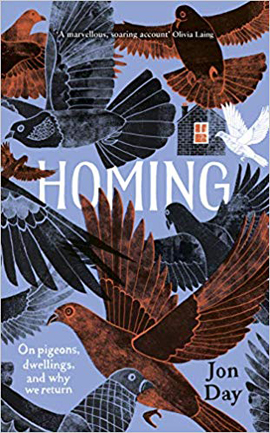 I certainly know a lot more about pigeons after reading Jon Day’s Homing – on pigeons, dwellings & why we return. First of all that the feral versions are not just ‘rats with wings’ and the homing version which Jon writes about are quite amazing. They’re synanthropes: creatures that live alongside us, they quite like the environment we create, ie lots of suitable places for a pigeon to live and lots of free food.

We know about the homing variety because of their instinct to head home, those childhood stories about indefatigable messenger pigeons carrying lifesaving messages back to their homebase. Of course they’re one-way messengers, you take them somewhere else and they fly back to where they’ve come from with the message strapped to a leg.

Jon tells us plenty about homing pigeons, how they find their way home and why, despite new ‘fanciers’ like him, keeping homing pigeons is a declining activity. Yet his account ranges far beyond pigeons to study why ‘home’ is such an important concept, why we can become homesick and why houses and housing are such a politically fraught part of life.

Although the pigeon fancier stays at home, waiting for the ‘kit’ of pigeons to return home and ‘trap’ when they re-enter their loft, it’s undeniably a very travel oriented occupation. Jon argues that just as the Tour de France bicycle race mapped out France for a generation of French people so did pigeon racing allow ‘their home-bound owners to travel by proxy.’ Jon’s pigeons were his ‘emissaries, mapping the land they flew over on my behalf.’ 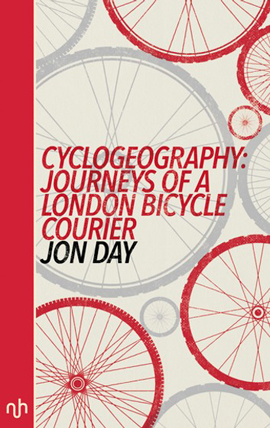 Having enjoyed Homing I turned to Jon Day’s earlier book Cycleogeography – Journeys of a London Bicycle Courier. I’ve always like bicycles and cycling and when cycle couriers were at their peak – like homing pigeons the bicycle courier business is in decline – I was very aware of where they congregated in San Francisco and in Melbourne. Quite apart from the travels on their deliveries couriers are often an itinerant band, moving on to other cities to ply their riding trade. At one time I suggested a Lonely Planet book about bicycle couriers, although it never happened.

As with Homing Jon ranges from his core subject to muse on the philosophy of bicycles, bicycle riding and cycle racing and he manages to ride far beyond the often tightly constrained boundaries of courier’s London to explore England further afield, often riding in the wheel tracks of other contemplative cyclists.

Eventually, however, he decides ‘I’ve learnt enough from the job. I got out while I still could.’