Provence. It reminds me of Provence. 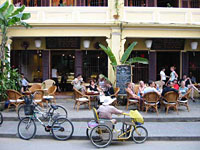 No, despite the long French colonial period Hoi An doesn’t look anything like the south of France, but there is the same feeling of being too pretty for a postcard. There’s the same mix of trendy little cafes, bars and restaurants, the same range of hotels from cheap and cheerful to stylish, the same shop-till-you-drop opportunities and the same feeling that, yes, you are in a tourist town, but what the hell.

Of course everything is cheaper than in Provence, even the glass of French vin (ordinaire) rouge I have with dinner. 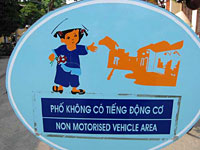 Hoi An is enjoying a tourist boom; not long ago there was precisely one hotel in the town. Then there were more, but never enough for the number of visitors. Now there are, at last count, 73, so there’s plenty of choice. I’ve got an air-con room with all mod cons and the hotel has a swimming pool, all for US$20 without even having to ask if there was a ‘better price.’ 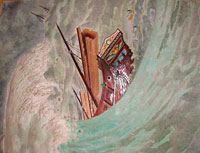 They’ve also worked to exclude motor vehicles from the old town streets – even motorcycles have to be pushed once you pass the barriers. There’s a neat little town tour where you get a ticket that lets you in to one museum, one old house and one Chinese assembly hall. I double up and buy two tickets.

And I eat well, sampling two noted Hoi An specialities – cao lau (flat noodles with vegetables and sliced pork) at lunch, and white rose (steamed shrimp in rice paper) at dinner. As well as that glass of French wine.