What’s the most dangerous thing that’s ever happened to you, I’m frequently asked? Well nothing I’m aware of I usually answer, for some reason you turn left instead of right and completely miss the accident.

Yesterday a Hewa Bora 727-100 aircraft crashed on landing at Kisangani in Congo DRC, killing at least 74 of the 118 passengers and crew on board. I flew the same aircraft (it was the only 727 passenger aircraft in the Hewa Bora fleet) in to Kisangani on 26 June and out again on 28 June, ie 10 days before its last flight. 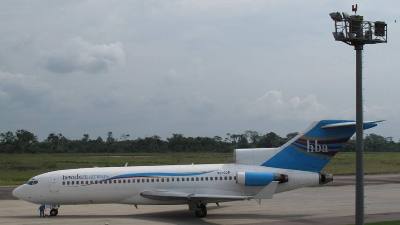 ▲ I took this photo just before I boarded in Kisangani. They’re very touchy about photography in Congo DRC so I took the picture very quickly while hoping to remain hidden behind a column. Aircraft geeks will note the aircraft has retro-fitted ‘winglets’ which I found kind of reassuring, clearly it had some fairly recent major work. The plane seemed in pretty good condition.

▲ Flying from Kisangani to Goma