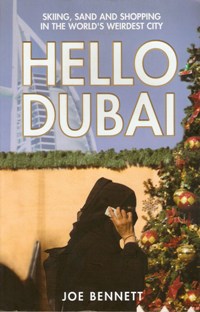 ‘Skiing, Sand and Shopping in the World’s Weirdest City’ is the subtitle and it’s a good summation. I’m overdue for another visit to Dubai, I’ve not been back for a few years, but I’ve been there quite a few times since my first visit in 1999. I’ve been intrigued by Dubai ever since reading Jonathan Raban’s Arabia Through the Looking Glass (now simply titled Arabia) with its picture of 1980 Dubai, although Wilfred Thesiger touched on Dubai even earlier.

Nobody seems ambivalent about Dubai, it inspires love or hate and often, it seems, in pretty equal measures.

Personally? Well it horrifies me when you look at ‘The World,’ some reports insist it’s the end of the world and that it’s subsiding back beneath sea level. Or when you pass a golf course with green grass in a desert due to the water desalination plants working overtime. Or when you even think about an indoor ski slope, when the temperature outside is often the wrong side of 40ºC.

An abra, the ferries which shuttle across The Creek between Bur Dubai and Deira ►

On the other hand you’ve got to be impressed by the sheer audacity of the creation, you can go to the museum and contemplate that you can trace almost the entire history of the city-state in aerial photographs. It’s that new.

And Emirates, the Dubai Airline, seems to know no limits. Take the double-decker Airbus A380, Qantas have ordered 20, Singapore Airlines 19, Lufthansa 15, Air France and British Airways 12 each, no US airline has ordered even one. And Emirates? 90. Today you can get from almost any major city on earth to almost any other major city on earth with just one stop. In Dubai.

Joe Bennett’s delightful book may not teach you anything unexpectedly new about the place, but he clearly enjoys it while also managing to avoid putting on those rose-tinted spectacles. He contrives to run into everybody, including those hard working citizens of the subcontinent, who keep the whole mirage in the desert going down at hard working, low paid, sweaty ground level. He even manages to join in an impromptu cricket match on the last page.