Drizzle: it has got steadily hotter as I’ve travelled north from Singapore, inverting the usual climatic rules and peaking in Hue. Hanoi is noticeably cooler and all day it tries to rain. It’s also Monday, when most museums are shut, so I spend the first half of the day just wandering. 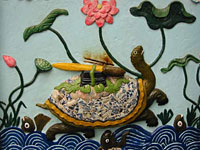 Hoan Kiem, the picturesque lake in the centre of Hanoi, has a picturesque legend about a turtle returning a stolen sword. And to this a picturesque Loch Ness-style monster, a giant turtle that lives in the lake. This Nessie periodically reappears, and the pagoda on the island in the lake has a stuffed example of one of these giants. It’s good luck if you spot one. 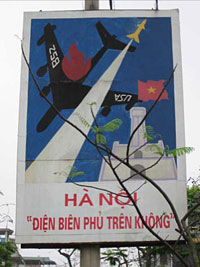 In the afternoon I take a xe om (motorcycle taxi) out to Ho Chi Minh’s mausoleum, even though it’s closed. There I bump into an enterprising xe om rider with a checklist of what is open today, so he whisks me out to another military museum (Hanoi seems to have plenty of them) with large chunks of a B52 displayed along with a selection of the Sam missiles which brought it down. 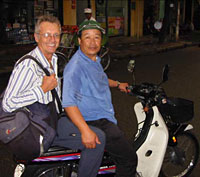 Finally there’s a visit to bia hoi (beer ahoy) corner. The freshly brewed beer you get in small cafes and bia hoi outlets costs about 10 cents US. Our guidebook points out that with a US$10 bill you can line up 100 glasses. Dinner at Cyclo, a stylish restaurant where the seats are recycled from cyclos (Vietnamese rickshaws, is delicious: beef with black pepper seeds.

By the time I finish there’s just time to race back to the hotel, grab my bag and rush to the train station.

There have always been some foreigners on the trains up the coast, but not many. I’ve only shared sleeper compartments with Vietnamese, but tonight I’m sharing the compartment with three women backpackers – Ellen, Elizabeth and Sandra. The first two are Americans who totally overturn that common misconception that Americans just don’t travel. They’ve been in the Peace Corps in Gambia, trekked extensively around Africa (and loved it), then travelled around India, and here they are in Southeast Asia.