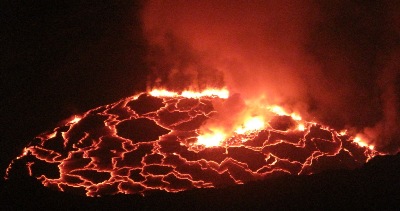 ▲ The lava lake in the Nyiragongo Volcano.

I’ve been kicking around Congo DRC with a sidetrip to the other Congo, Congo Republic (aka Congo Brazzaville). I’ve covered Lubumbashi, Kinshasa, Brazzaville and Kisangani and my final stop was Goma, right on the border with Rwanda.

After the genocide in Rwanda in 1994 many of the genocidaires fled through Goma into Zaire, pursued by the forces of the RPF, the Rwandan Patriotic Front. So it’s long been a strategic and troubled area. Today there’s a huge UN force in and around Goma, but the security situation has greatly improved and while Congo DRC is hardly having a ‘tourist boom’ if you’re going to see another tourist, this is where it will happen. Goma has two big attractions: gorillas and an amazing volcano.

Gorilla tracking is a big deal in neighbouring Rwanda, there’s often a long waiting list and you have lay out US$500 for a permit, but it’s an amazing experience and plenty of visitors are willing to put up with the wait and the expense. Well the same mountain gorillas can be found across the border in the Virunga National Park in Congo DRC, 50km north of Goma. At US$400 a gorilla tracking permit is nearly as expensive as in Rwanda, throw in the pricey visa and you’ll actually pay more to see them, but the waiting list is much shorter and the experience is probably a little less commercial. 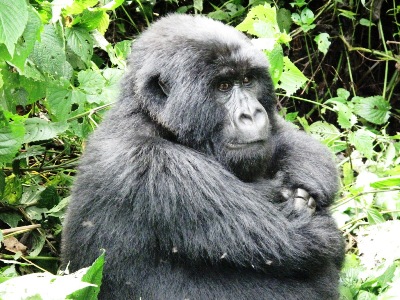 ▲ She lounged back and watched us

I went gorilla tracking with three South Africans and we soon encountered the Kabirizi gorilla family, at 36 strong the biggest of the four groups you’re likely to meet. A polite ‘harrumph’ behind us and we looked around to see one of the gorillas following us. She sat down to look at us. Then lay back and scratched her stomach. Then rolled on her side and propped her head up on her hand with her elbow on the ground. Then made a couple of faces. And then indicated could we please get out of the way because she’d like to carry on down the path. So we politely moved to one side and damn me, she did a perfect little forward roll somersault, curled up in a ball and rolled down the path! I’d say ‘like a little black furry ball’ except she probably weighed over 100 kg. 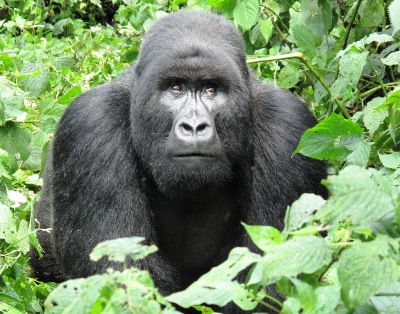 We spend an hour following them around. They were up in the trees, down from the trees, back up in the trees, lounging around, eating vines and leaves. This family has three silverbacks and we met up with the biggest of them at one stage. He sat there ignoring us and looking very regal. Silverbacks are the alpha males, when they get to certain age and size the fur on their back takes on a silvery sheen. We also found a mother with a very small baby gorilla, sitting and feeding, the baby completely intrigued by us. After 10 minutes or so she decided to move on and just grabbed the baby by one arm and sort of tossed it behind her, it landed on her back and grabbed hold. Great! 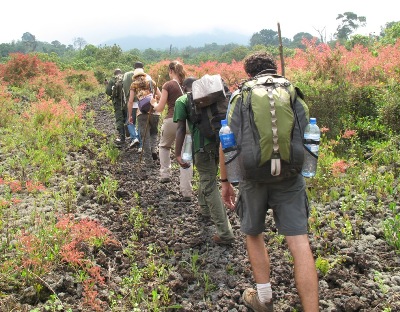 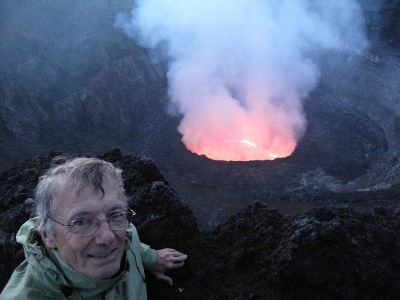 ▲ Travel 17km from Goma and then climb for four or five hours from 1980 metres to the crater rim of the Nyiragongo Volcano at 3470 metres and look down, there at your feet is a bubbling lava lake. 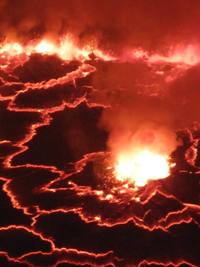 ◄ It’s spectacular by daylight, but after dark – there are huts where you can stay just below the crater rim – it is quite amazing. We sat and watched for a couple of hours and the action never stopped. A web of red made a constantly changing pattern across the lake, the lava would bubble up and fountain around the edges or in the centre. A constant background noise, like a pot bubbling and boiling over, provided the soundtrack. 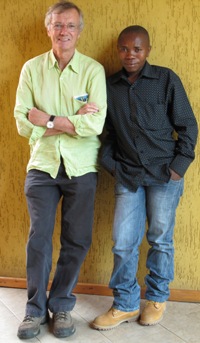 Emmanuel met me at Goma’s airport, a pint sized bundle of energy, if he was Irish he’d be a leprechaun. ►

Most of the way around the Congo I organized things on the fly, when I got to one place I’d book a flight to the next or send an email to get a hotel room. Goma was the exception, I needed someone to fix up my gorilla and volcano climbing permits, and to organize transport and guides. So like many Thorn Tree Congo travellers I turned to Emmanuel Goma’s organizer par excellence. If you want Emmanuel to organize your travels you can email him at: