I’m staying in the very pleasant (and busy too) Gjáagarður guest house/youth hostel in Gjógv. It’s a very pretty little village, but that’s no feat … every village in the Faroes is very pretty. They all look like the toy villages in some kid’s model railway, neat little primary-coloured houses all tidy and trim. That’s helped by the fact that you’re often looking down on them, a lot of the time in the Faroes you seem to be way high up, looking down on toy town below.

The Faroes? They’re a group of islands directly north of Ireland. Way north, the capital Tórshavn is at 62º North, that puts it about a degree north of Anchorage in Alaska, or two degrees south of Reykjavik in Iceland. Their status? A kind of semi-independent offshoot of Denmark. We didn’t put them in the first edition of The Travel Book, our assessment of every country in the world. There were so many complaints the Faroe Islands were the one ‘country’ we added to the second edition.

Vestmanna
Today I started in Tórshavn and drove northwest to Vestmanna to take a boat trip to see the soaring bird cliffs and the thousands of nesting seabirds including puffins. They’re the bird everybody wants to see in the Faroes, but I was equally impressed by the suicidal sheep. They contentedly graze on impossibly steep slopes where it’s clearly impossible for them to have got there without rock climbing equipment. 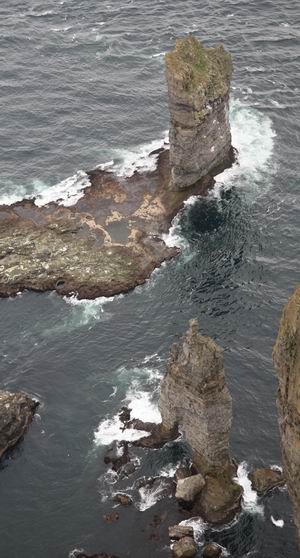 Eiði
Next stop Eiði, yeah I know it’s unpronounceable as well. A steep walk above the village takes you to a cliff top lookout above the twin rock stacks known as the Risin and Kellingin, aka the prince and the hag or the giant and his troll. This ill-intentioned pair had lassoed the Faroes and were trying to tow it away to Iceland, but they spent so much time squabbling they were turned into stone.

Don’t come to the Faroes if you don’t have a head for heights. Every walk seems to end at a sheer drop with the sea a couple of hundred metres directly below you. You worry that if a gust of wind doesn’t push you off a stray sheep will come by and do the job.