Georgia (the ex-Soviet one)

To the west of Georgia is the Black Sea, head east and you come to Azerbaijan and then the Caspian Sea, head south and you arrive in Turkey to the south-east or Armenia to the south-west. Or head north and you’ve got Russia. We won’t talk about that, the Georgians still don’t get on to well with the Russians.

In the old days Georgia was the Soviet Union’s number one tourist destination, each year five million comrades from Moscow to East Berlin, Warsaw to Prague, Budapest to Leningrad, all flocked to the delights of Georgia’s Black Sea coastline. They’re all gone and tourism from the west is barely starting to replace them. Of course there’s been a certain amount of strife since the Soviet Union fell apart, but apart from the breakaway statelets it’s all pretty calm today. 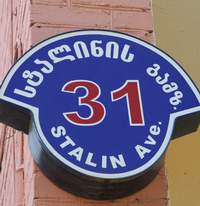 Tbilisi
The capital stretches picturesquely down a long river valley, it’s a colourful blend of Orthodox churches topping hilltops, some fine old architecture and some pretty awful stuff from the Soviet period. Tbilisi looks like a grittier version of some of the postcard pretty old eastern European cities further to the west.

There are also lots of statues including this gleaming gold rendition of St George knocking off the dragon, it’s in the main square Tavisuplebis moedani and replaces an earlier statue of Lenin. 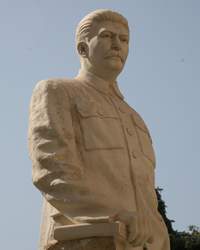 Georgian Joe
Josef Stalin is still the most famous Georgian and not far from the capital in Gori his birthplace his  enshrined, you can inspect his railway carriage and find out all about him in his museum, OK purges, forced collectivisation, Siberian gulags, mass starvation and the other bad stuff doesn’t feature, but the good stuff is all here. The town is dominated by a towering Stalin statue, just continue straight down Josef Stalin Ave.

Upper Omayo
In Prospero’s Bookshop, a travellers’ meeting point which he started, I met up with English resident Peter Nasmyth, author of Walking in the Caucasus – Georgia. ‘The walking is as good as in Nepal,’ claimed Peter, ‘but the crowds are much less.’ I managed to visit the remote mountain town of Upper Omalo, dominated by five solid stone watchtowers. Just across the mountain range to the north is Chechnya, but the trouble there doesn’t spill into Georgia.