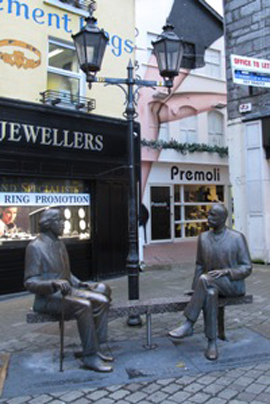 I’ve been on the road for the first couple of weeks of November.  Starting with a visit to Ireland for an Irish Tourist Board (Fáilte Ireland) conference in Galway. Walking along Galway’s main pedestrian street I came across a strangely familiar statue of that noted Irishman Oscar Wilde.

It was indeed familiar, the gentleman he appeared to be conversing with was the Estonian writer Eduard Wilde (they never met) and I’d come across the two figures in 2005 in the town of Tartu in Estonia. The Galway statues were reproductions, a gift from Estonia!

Maureen and I paid a short visit to Inishmor, the largest of the three Aran Islands. The weather wasn’t very cooperative, but I did manage to walk out to the south coast to appreciate, once again, what a wild and wonderful stretch of coast the southern edge of these rocky islands presents to the fury of the Atlantic.